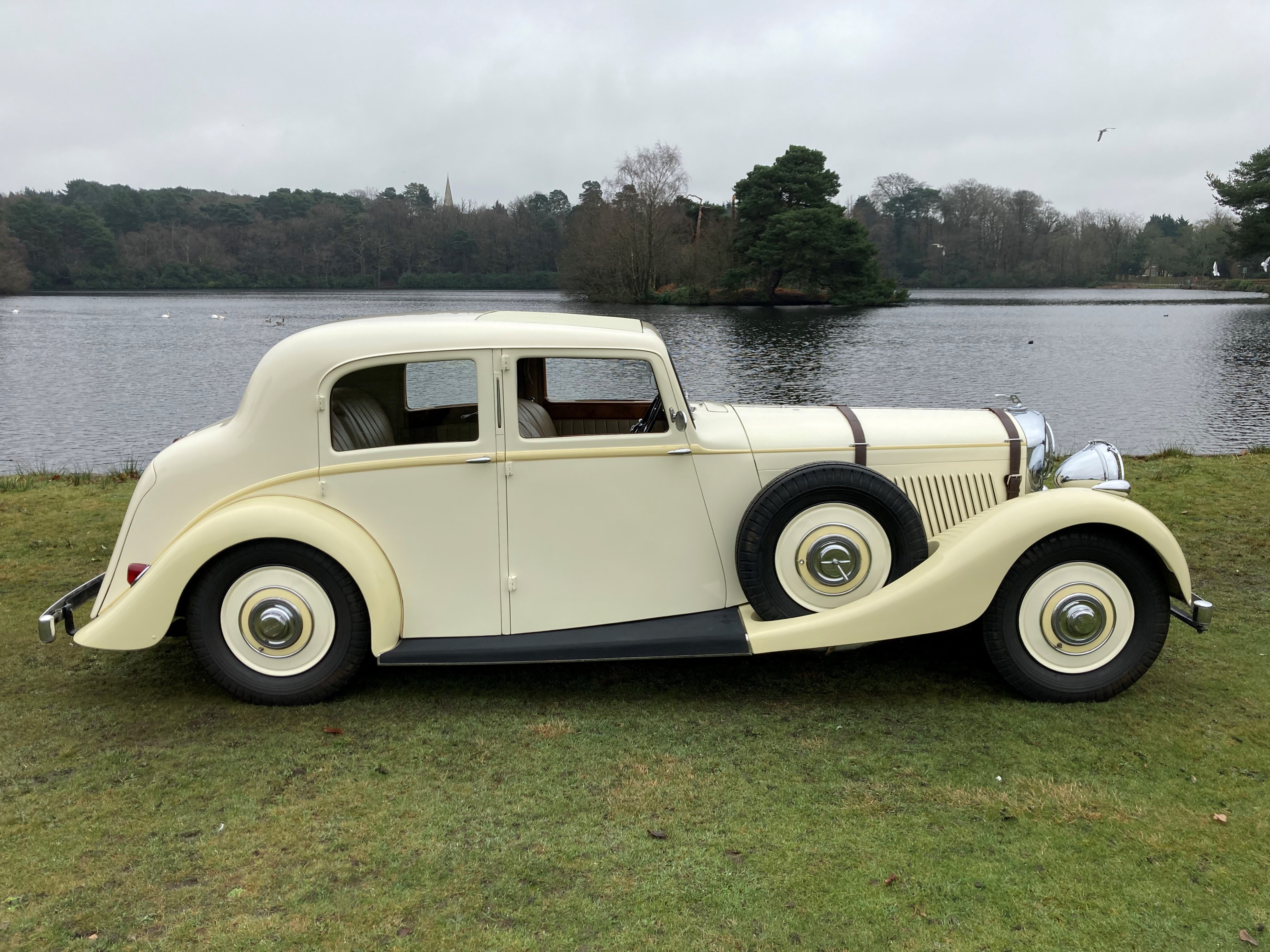 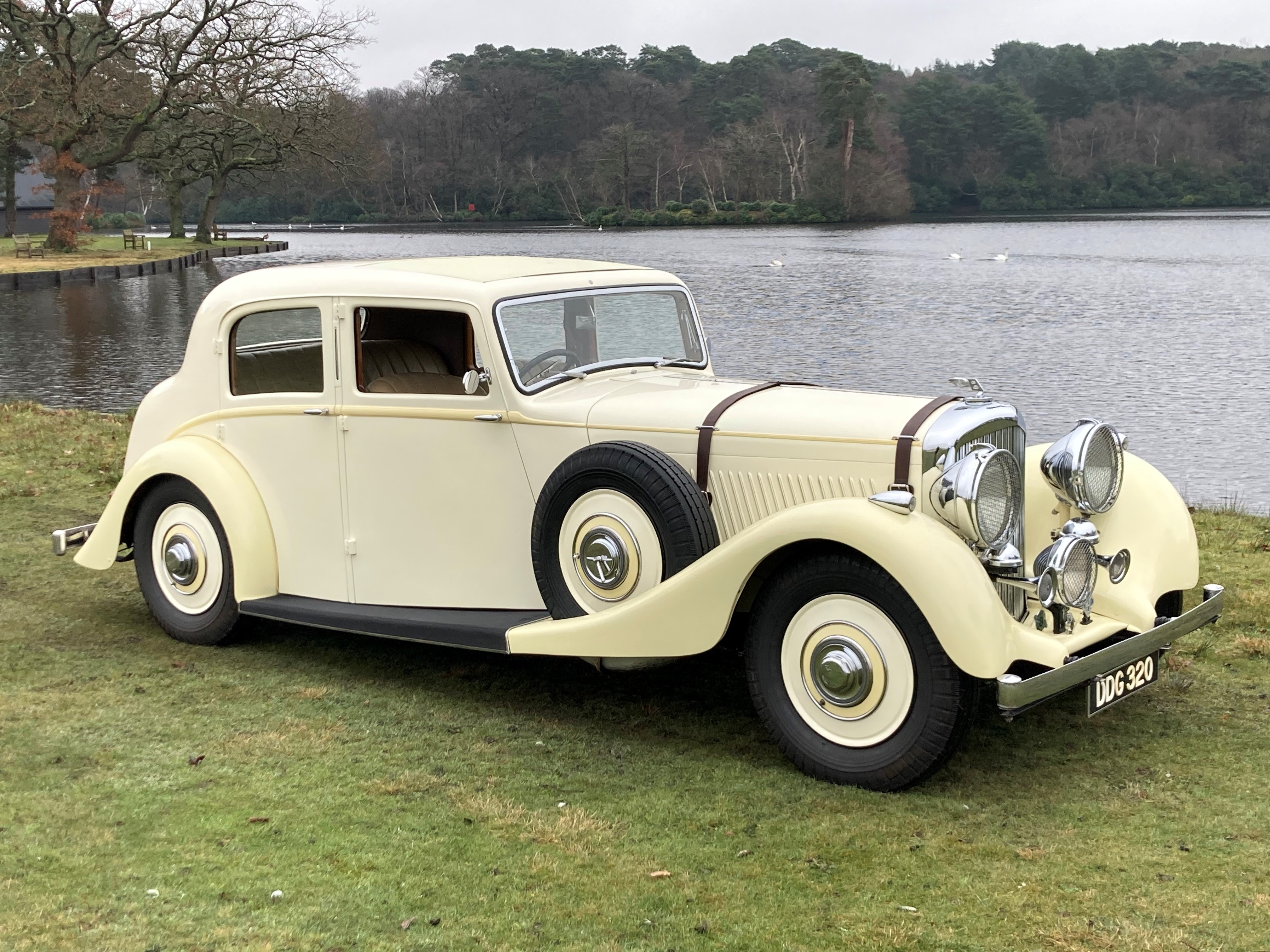 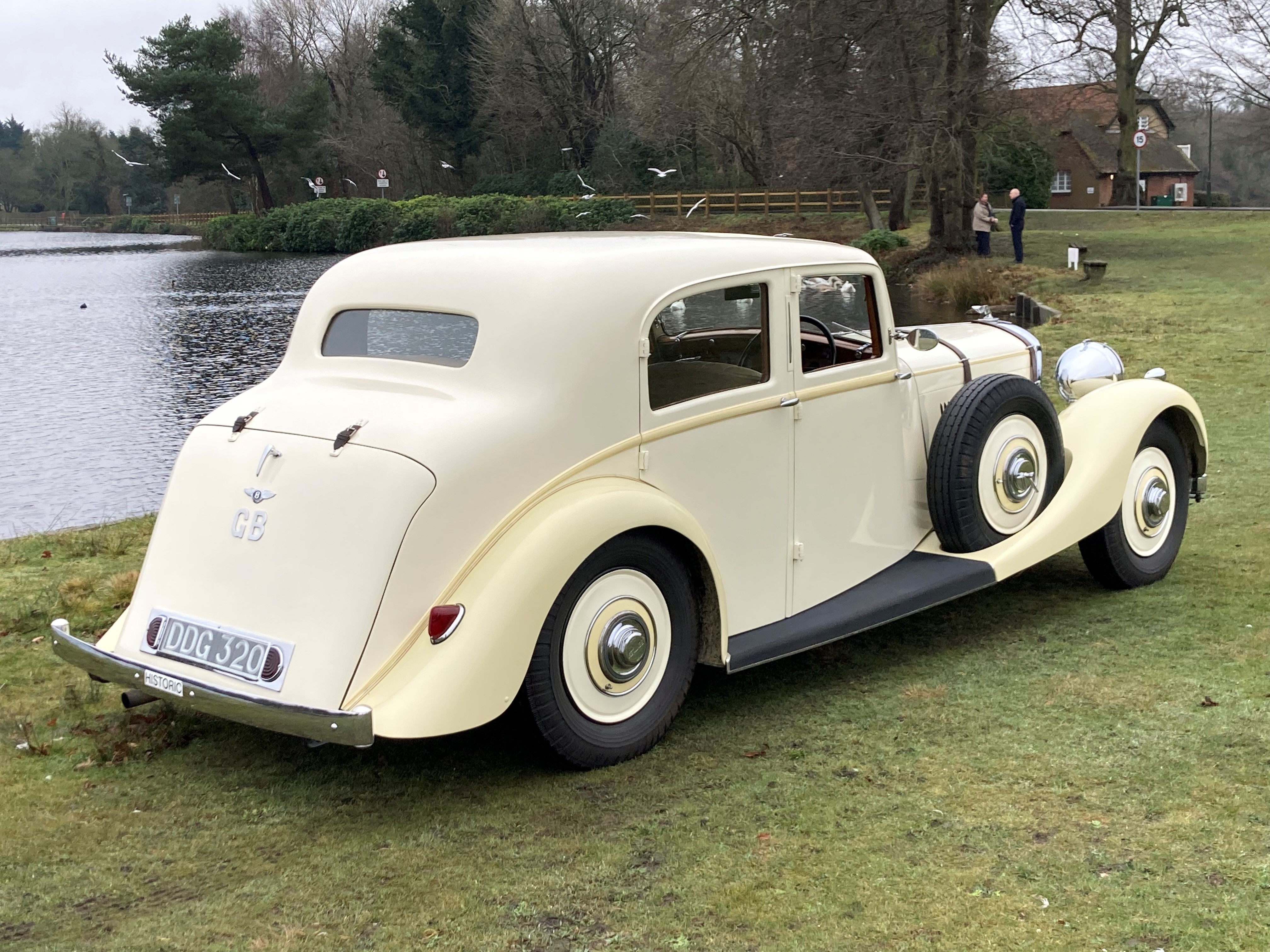 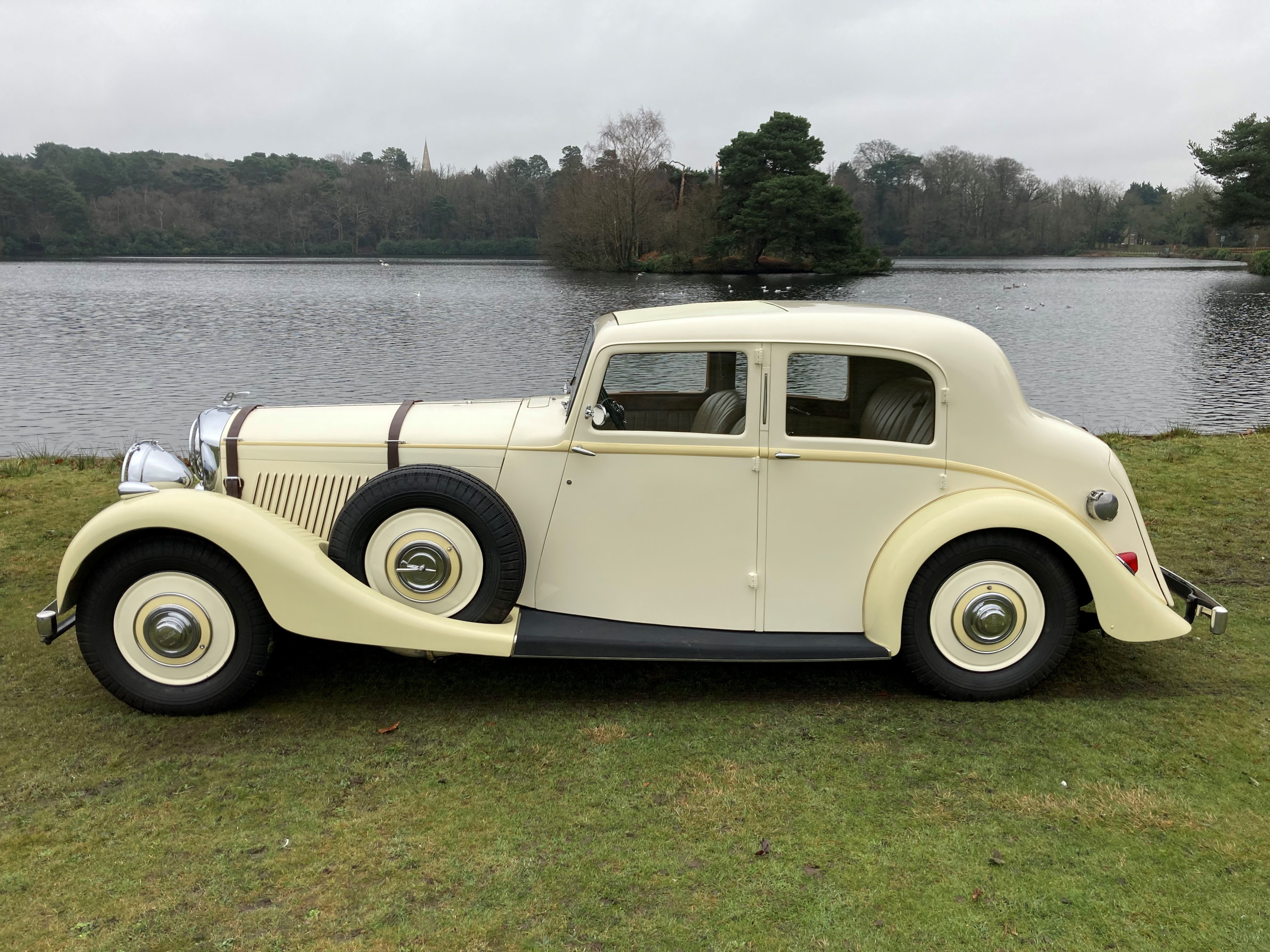 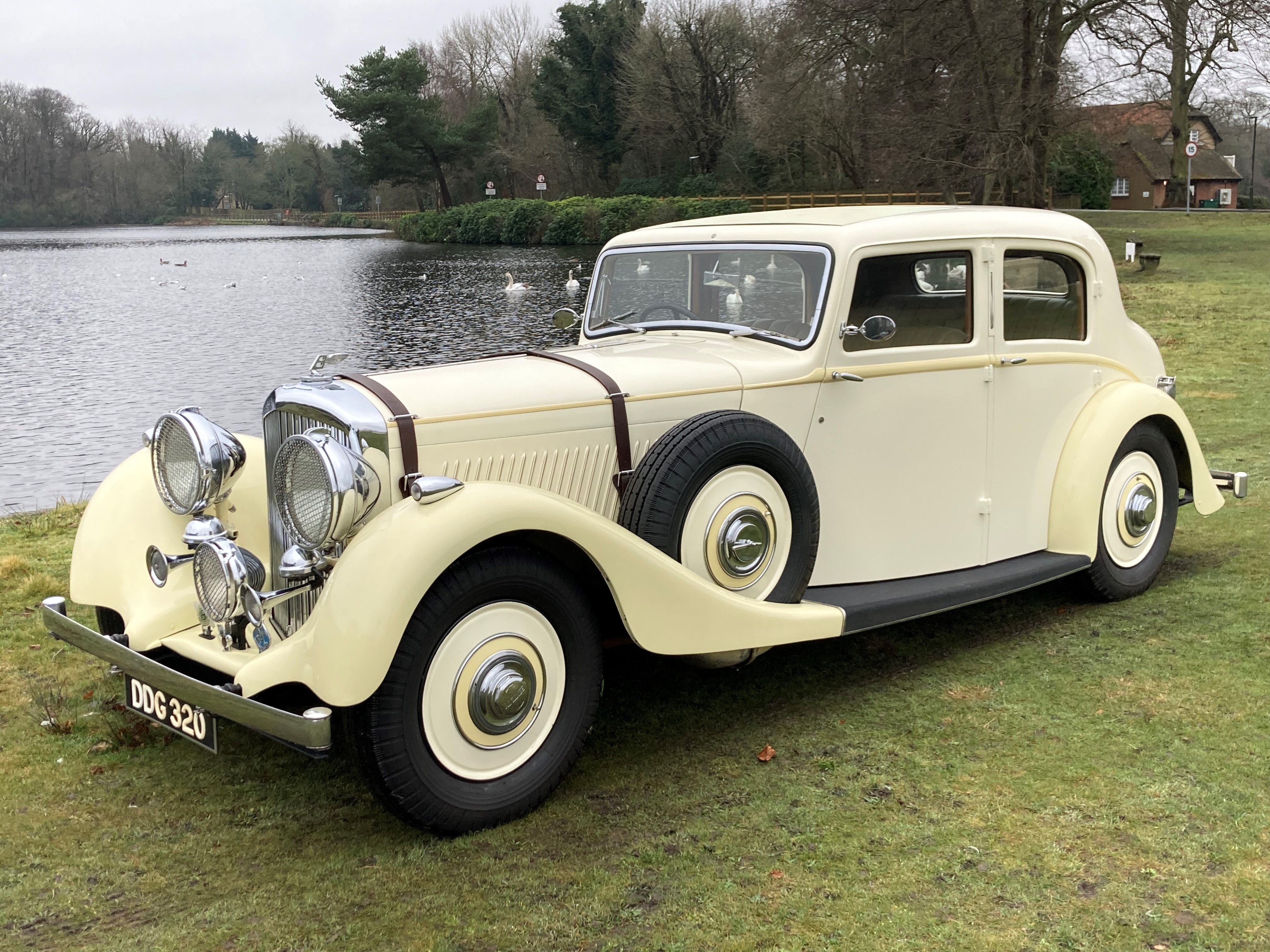 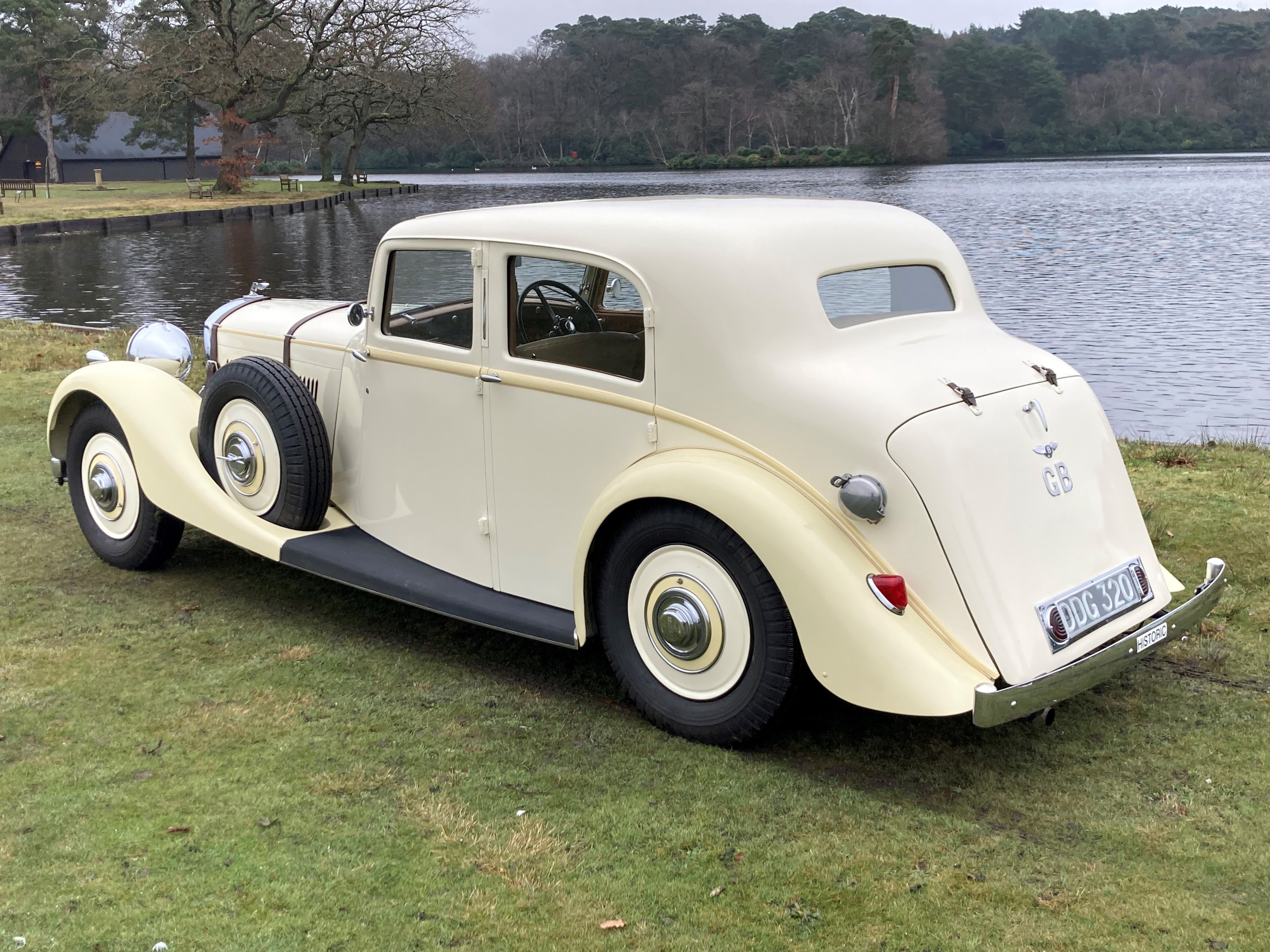 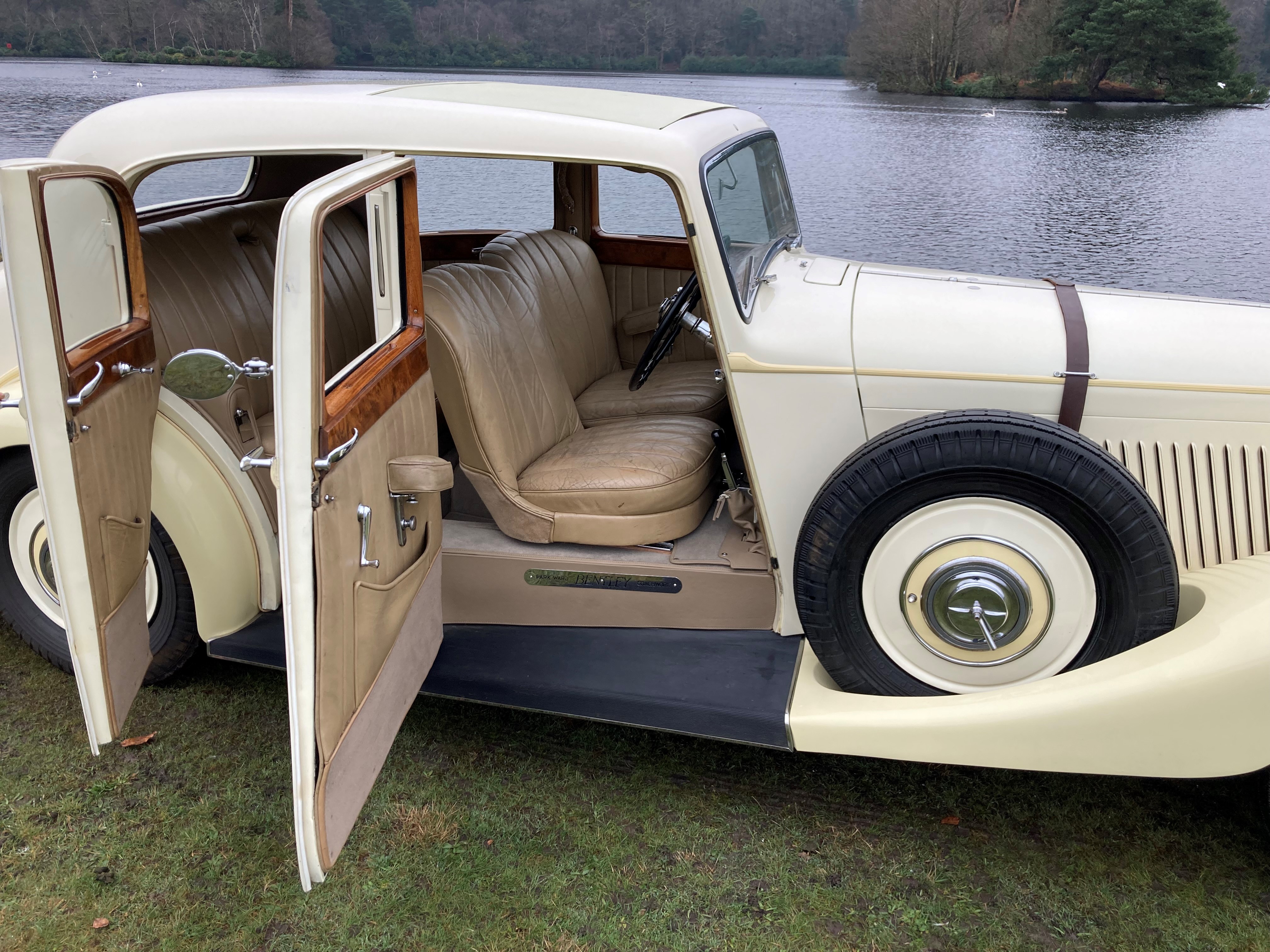 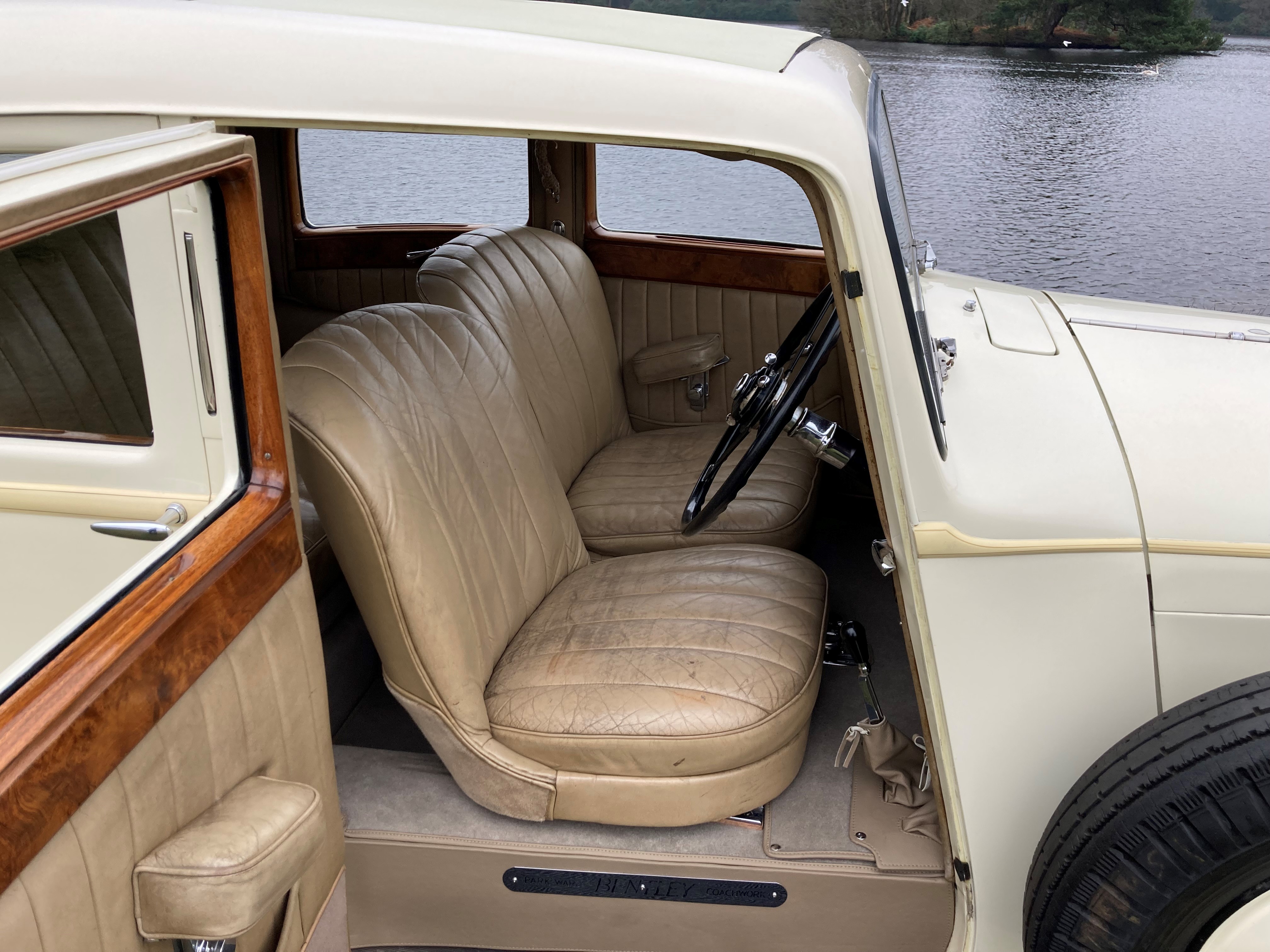 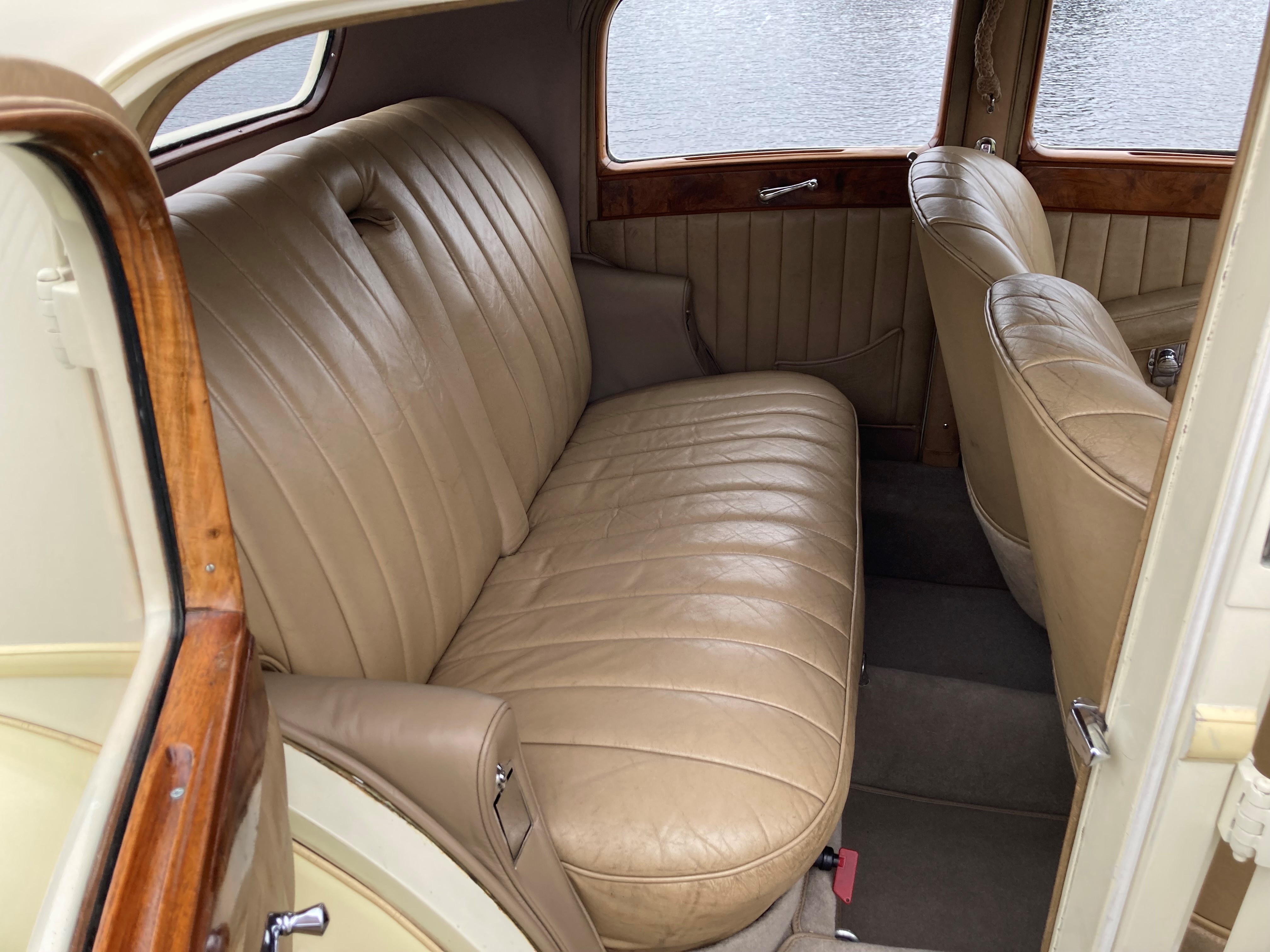 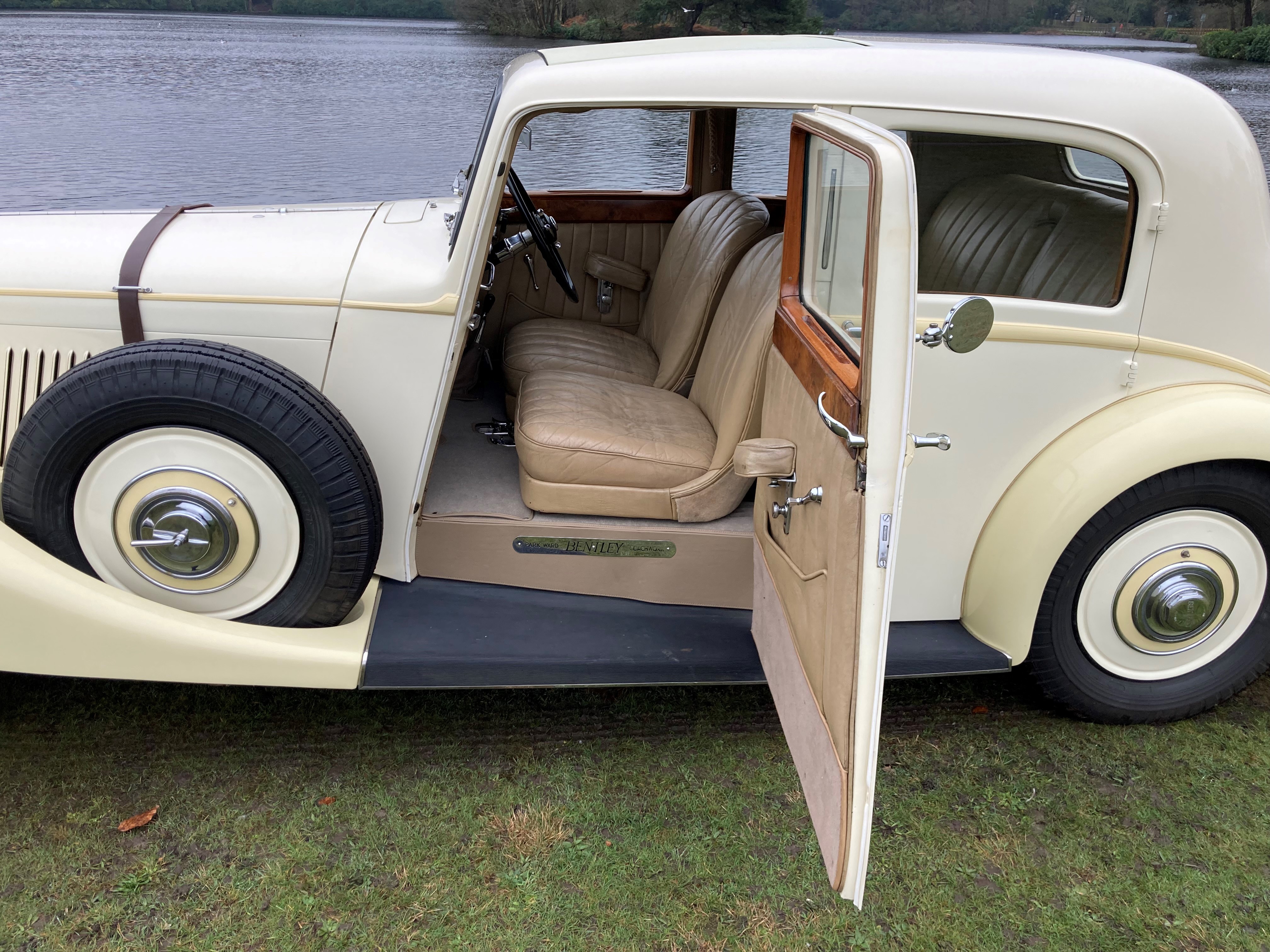 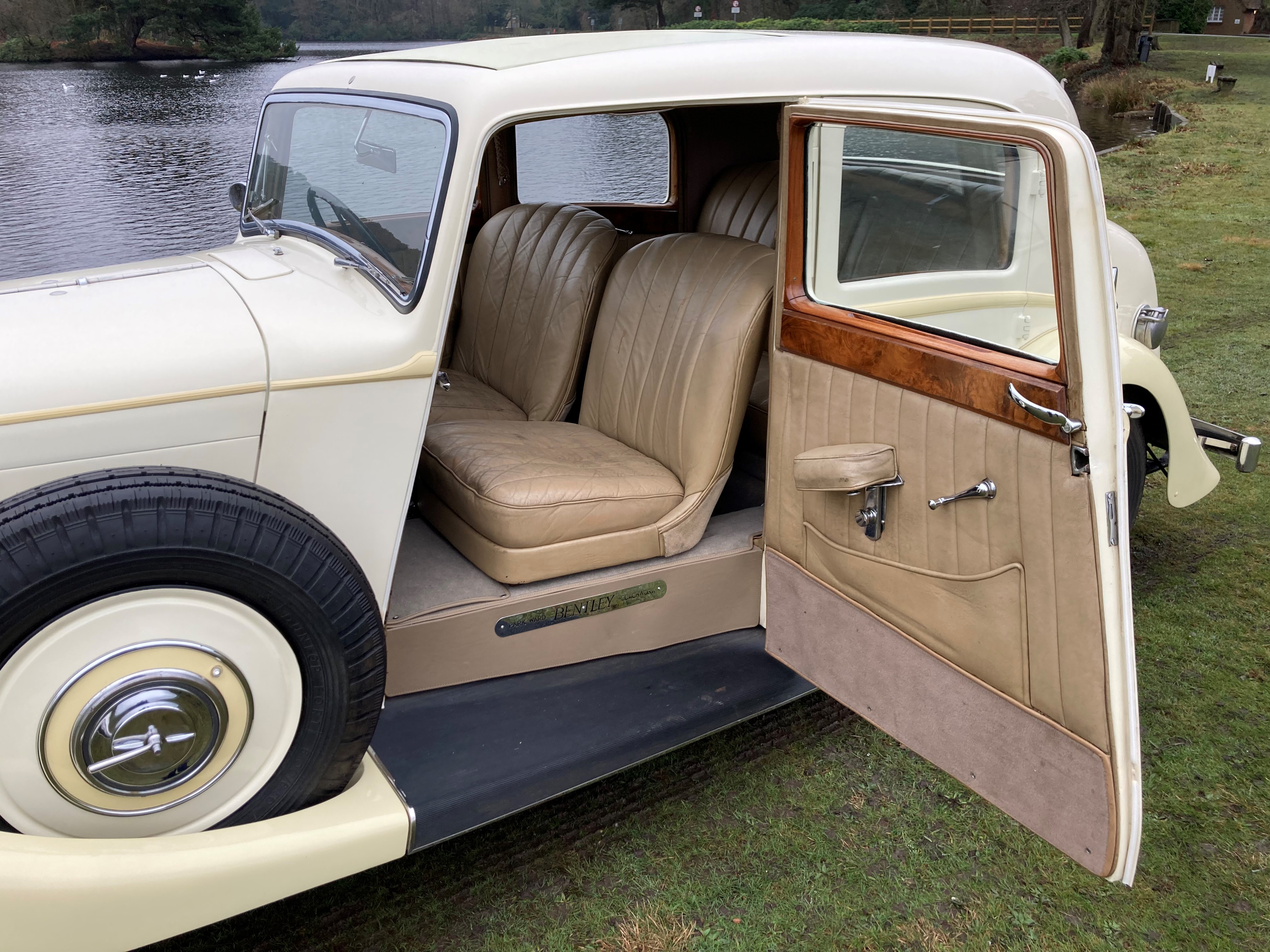 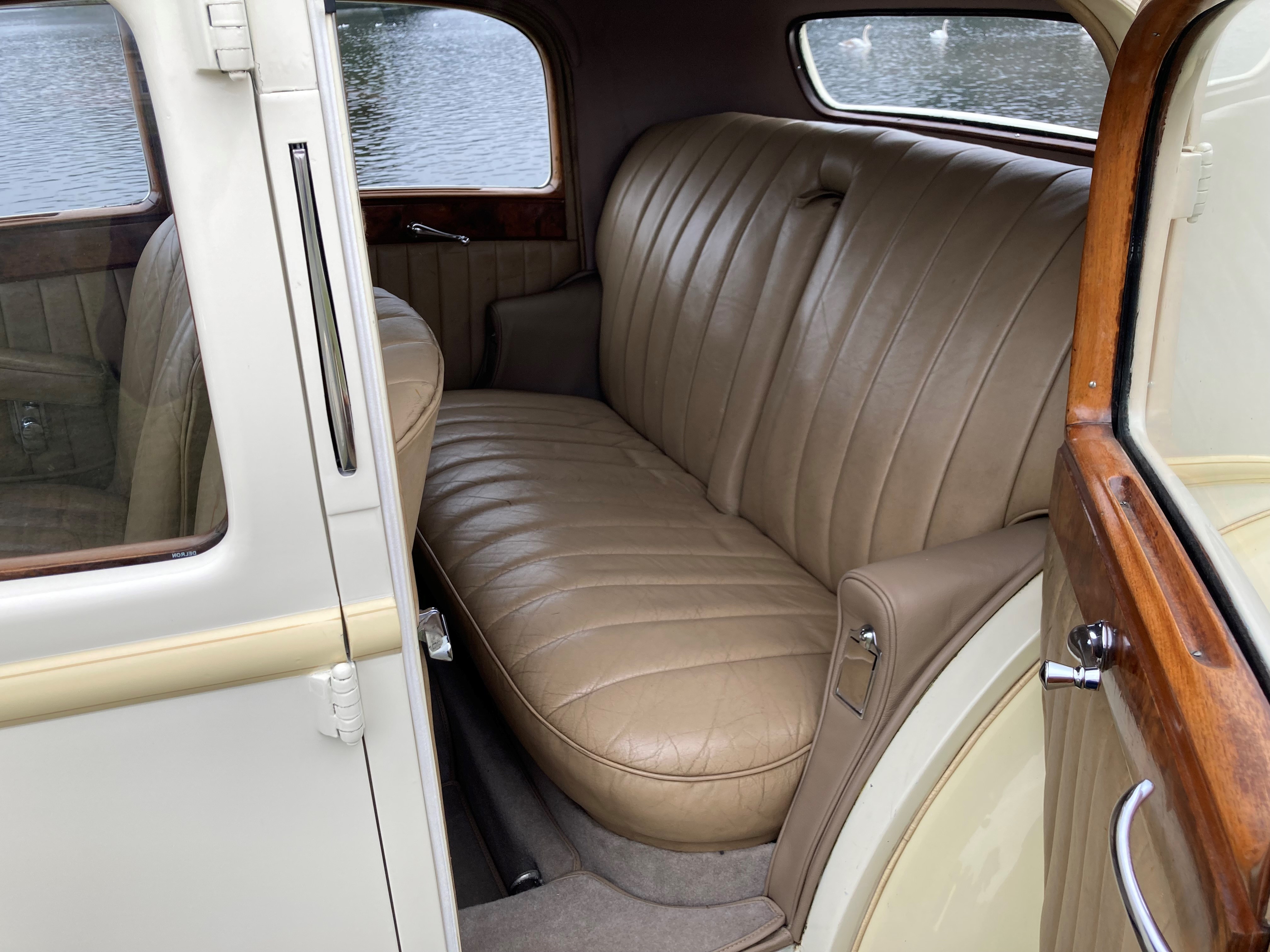 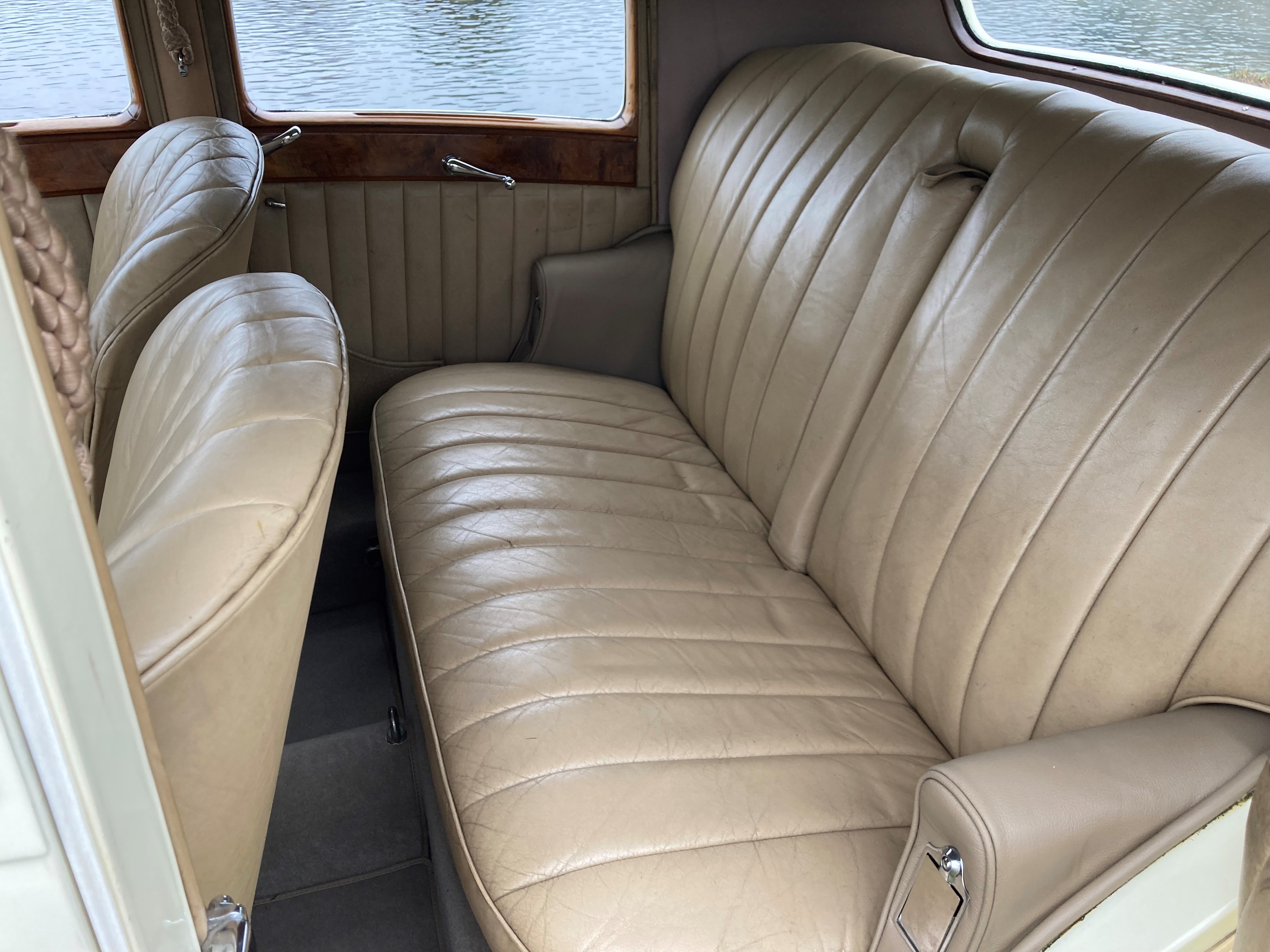 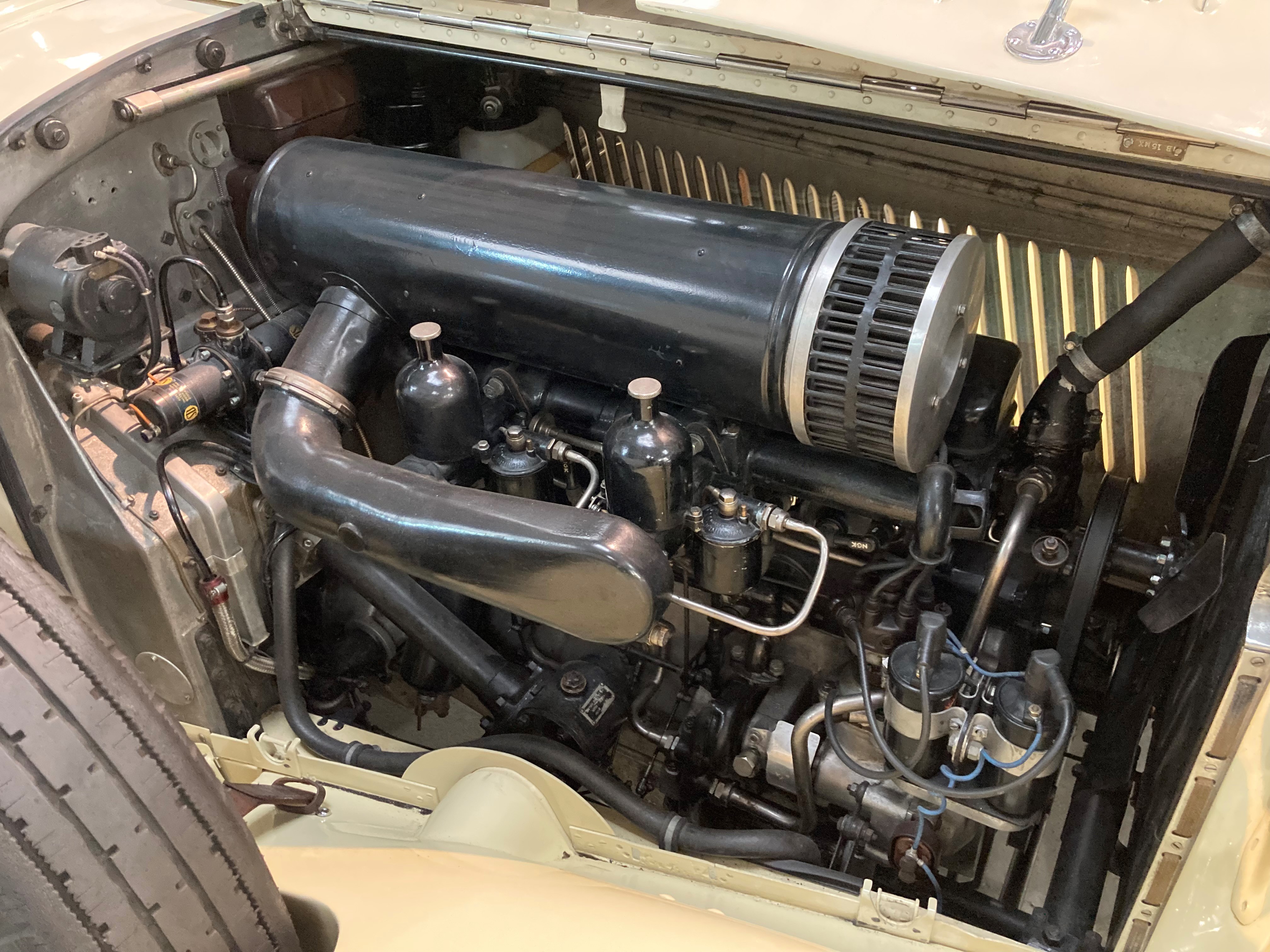 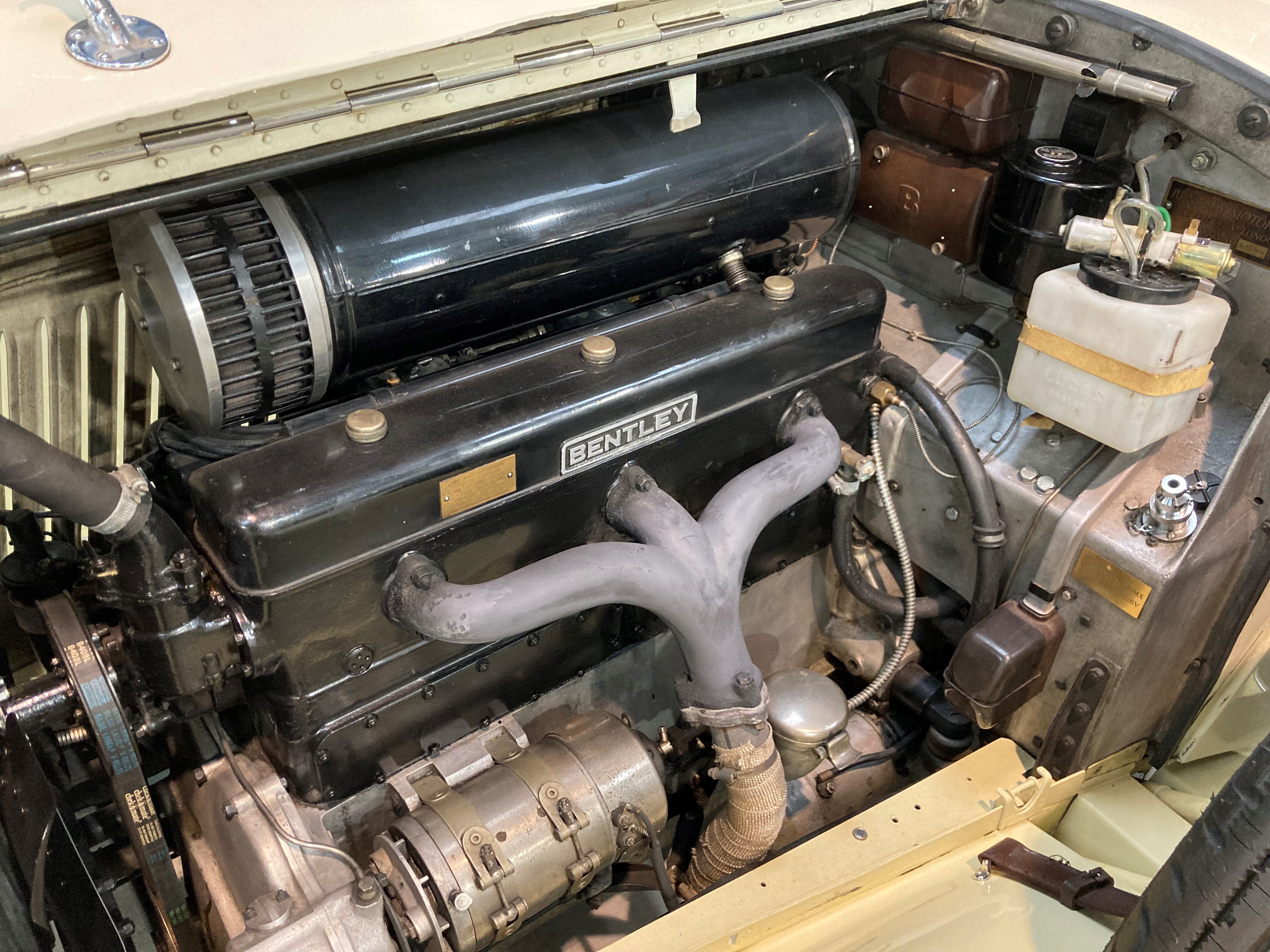 During the late 1920s and early 1930s Bentley ran into grave financial trouble and by 1931 Rolls-Royce had stepped in and bought the assets and goodwill of the defunct company and formed a new one, Bentley Motors (1931)Ltd. Rolls-Royce had considered the Bentley marque to be a growing threat to their future success, but following their purchase decided to continue the Bentley name, albeit under their own stewardship, taking the company in an entirely new direction with the creation of the Silent Sports Car or Derby Bentley. In 1933 the new Bentley 3.5 Litre model was released and was an instant success. The combination of effortless power and style met with almost universal praise. It was powered by a developed twin carburettor version of Rolls-Royces own 20/25 model and was installed in a low 126-inch wheel base chassis that basically remained unaltered until the cessation of production in 1939 due to the outbreak of hostilities. Synchromesh was present on third and fourth gears and the Derby’s were fitted with a cross flow cylinder head and superb servo assisted brakes, encapsulating all of the perfection of Rolls-Royce engineering in this small sporting Bentley. Fitting of individual coachwork by approved body builders continued in true Rolls-Royce fashion giving potential buyers a great deal of choice in the look of their new motor car.

Chassis No B15MX was originally delivered on the 12thof May 1939 to Captain T.R.Colville who served in His Majesty’s Egyptian Army between 1914 and 1919. Later in life the car was part of a large well-known collection in the UK before it was supplied by Frank Dale & Stepsons in 2011. The new owner was very clear with his intentions for the car, he wanted to overhaul and prepare the car for long distance rallies, with his first outing already booked as the 2013 Peking to Paris rally. To ensure the car was up to the task of completing such endurance events our workshop team were instructed to carryout extensive work to Chassis No B15MX in the ensuing months, completely overhauling every mechanical component to the highest standards, including the engine, gearbox, back axle, braking system, suspension, steering, wheel construction, one shot lubrication, electrics, the cooling system, and the fitting of a newly manufactured fuel tank. Significant upgrades were also made to bolster some aspects of the car and to enable it to cope with rough roads, poor fuel quality and high atmospheric temperatures, all of which were to been countered on the Peking to Paris rally.

Following completion of the extensive works, the car was subsequently shipped to China and some 12,800 kilometres later, over thirty-three days of driving, across the Gobi Desert, the Russian Steppes and then through Europe, Chassis No B15MX arrived in Paris on the designated day at the correct time, testament to the car’s preparation works. This epic journey was all documented and featured in the Bentley Drivers Club review in December 2014 with several pages dedicated to the cars adventure halfway across the world.

Following the cars successful completion of the Peking to Paris rally in 2013 it then took part in further events, including The Anzac Rally in2014 which was a nine-day tour across Western Australia through the outback. In 2015 the car took part in The Great Australian Drive which began in Geelong, Victoria and culminated in Port Douglas in Northern Queensland some thirty days later. In 2016 Chassis No B15MX successfully completed The Gold Rush Rally which consisted of nine days driving from Freemantle to Kalgoorlie (home to one of the worlds deepest gold mines) and then back to Freemantle. Most recently the car was shipped back to the UK to take part in the 2018 Flying Scotsman which was a drive from Brooklands in Surrey to Edinburgh in Scotland. All of these events were successfully completed without issue.

After each event, the car was thoroughly checked and brought back to its previous condition regardless of cost, so it was fresh and ready for its next adventure. The cosmetics have also been tended to as well, to ensure a very presentable and smart motor car. It comes complete with its FIVA identity card, and an extensive list of spare parts, equipment, manuals, and special tools all used in connection with the endurance rally events it has taken part in. This very special Derby Bentley has an incredibly interesting and highly successful rallying history and is fully checked, prepared and ready for its next adventure.