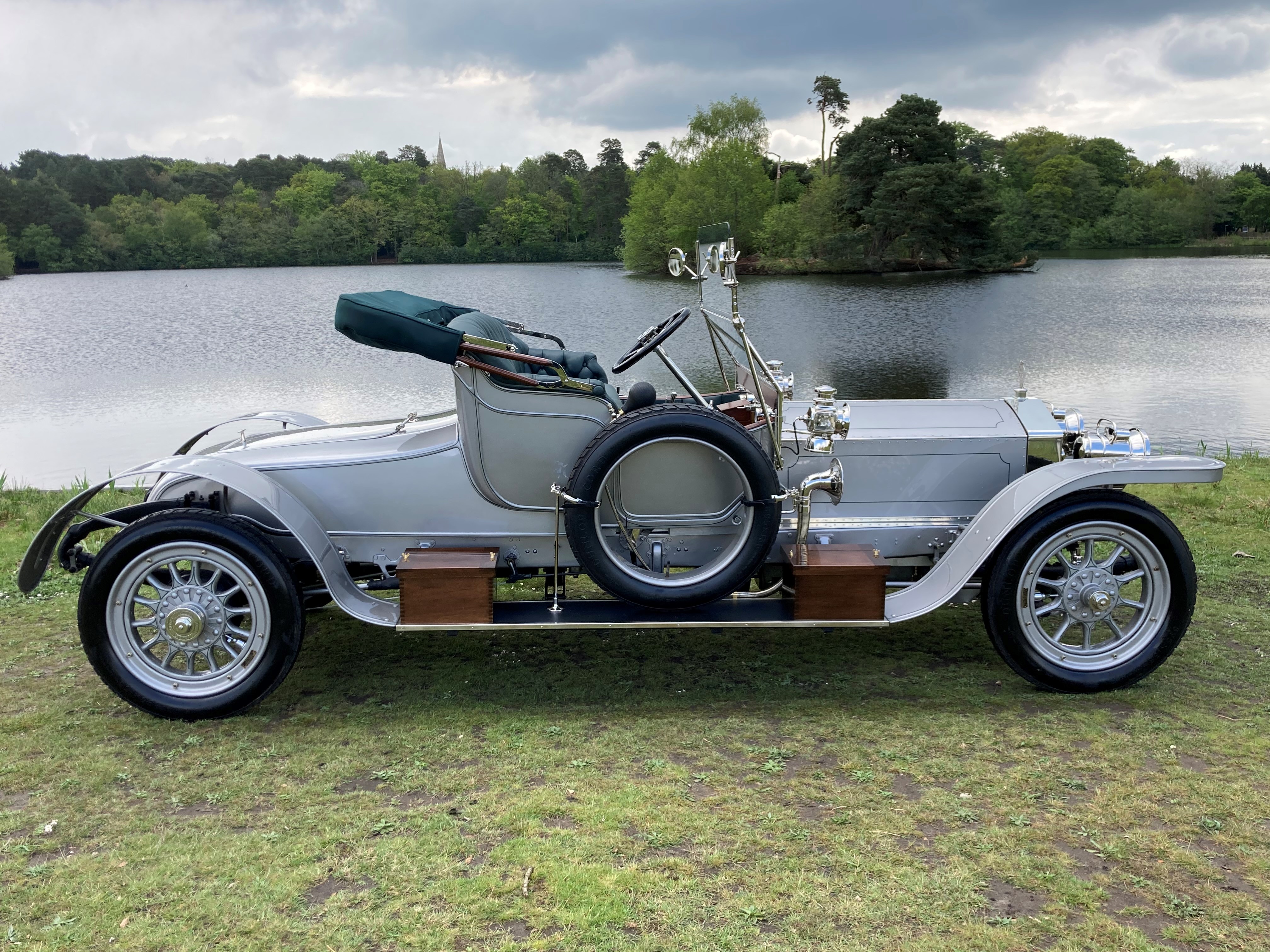 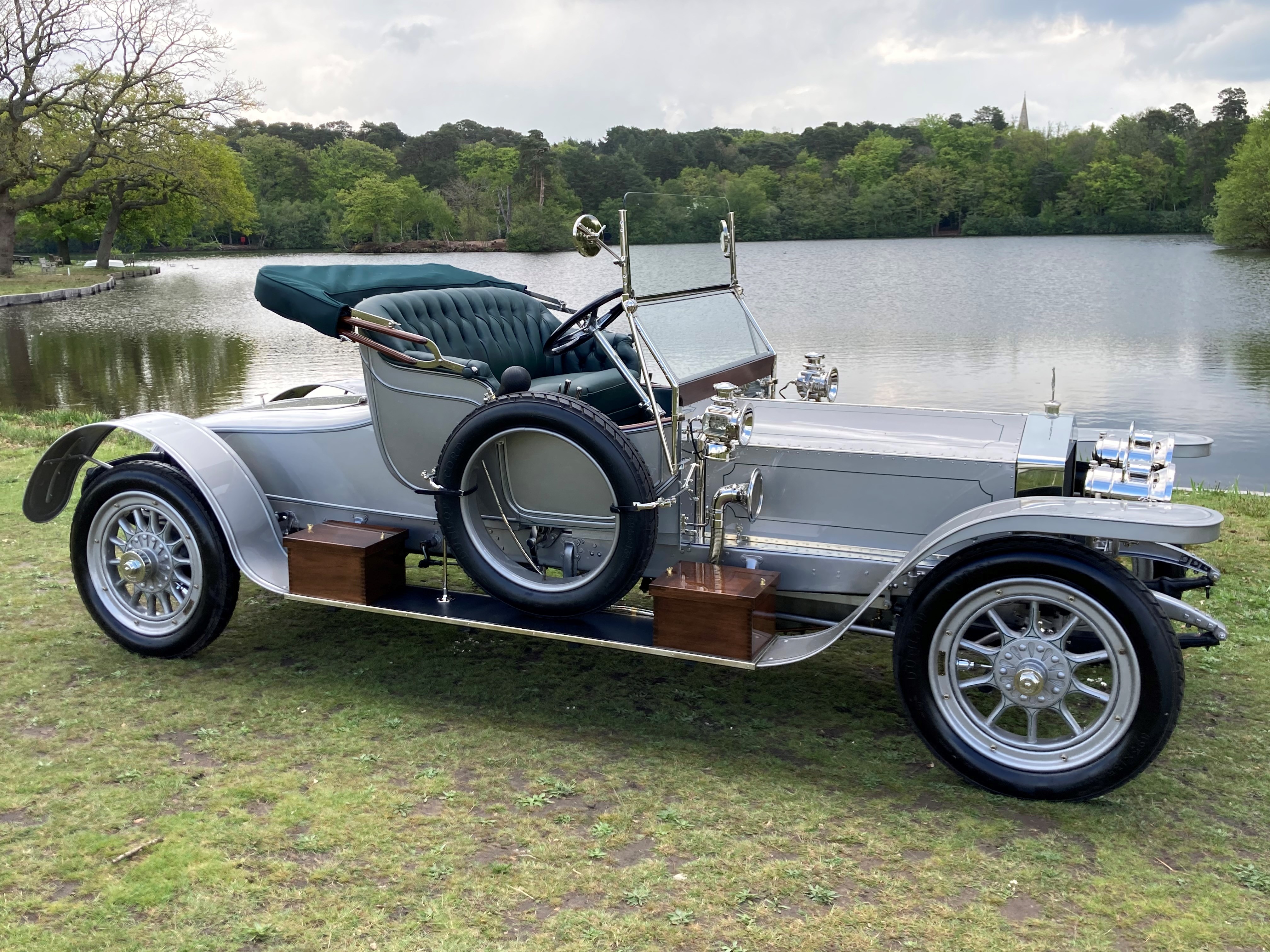 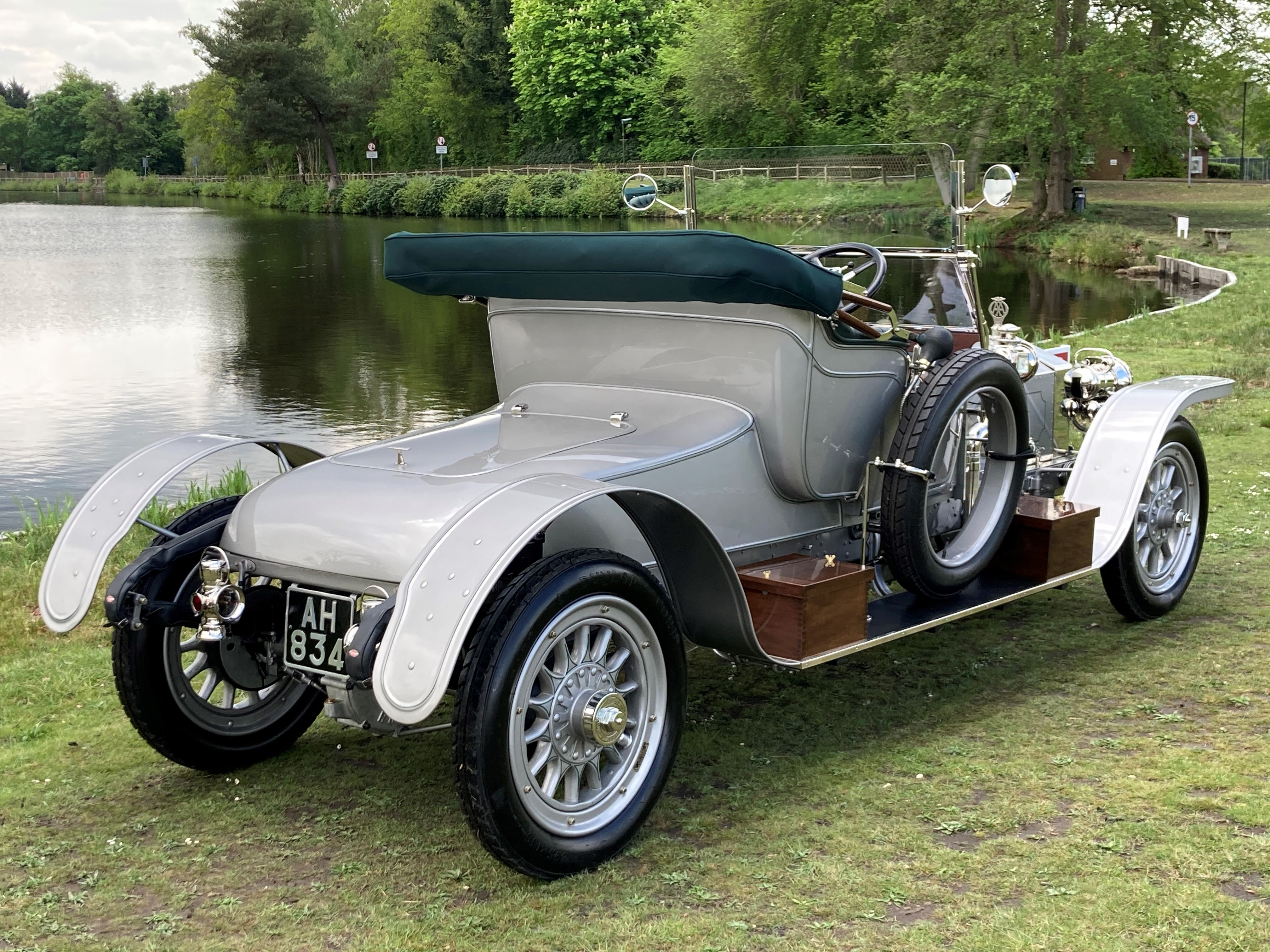 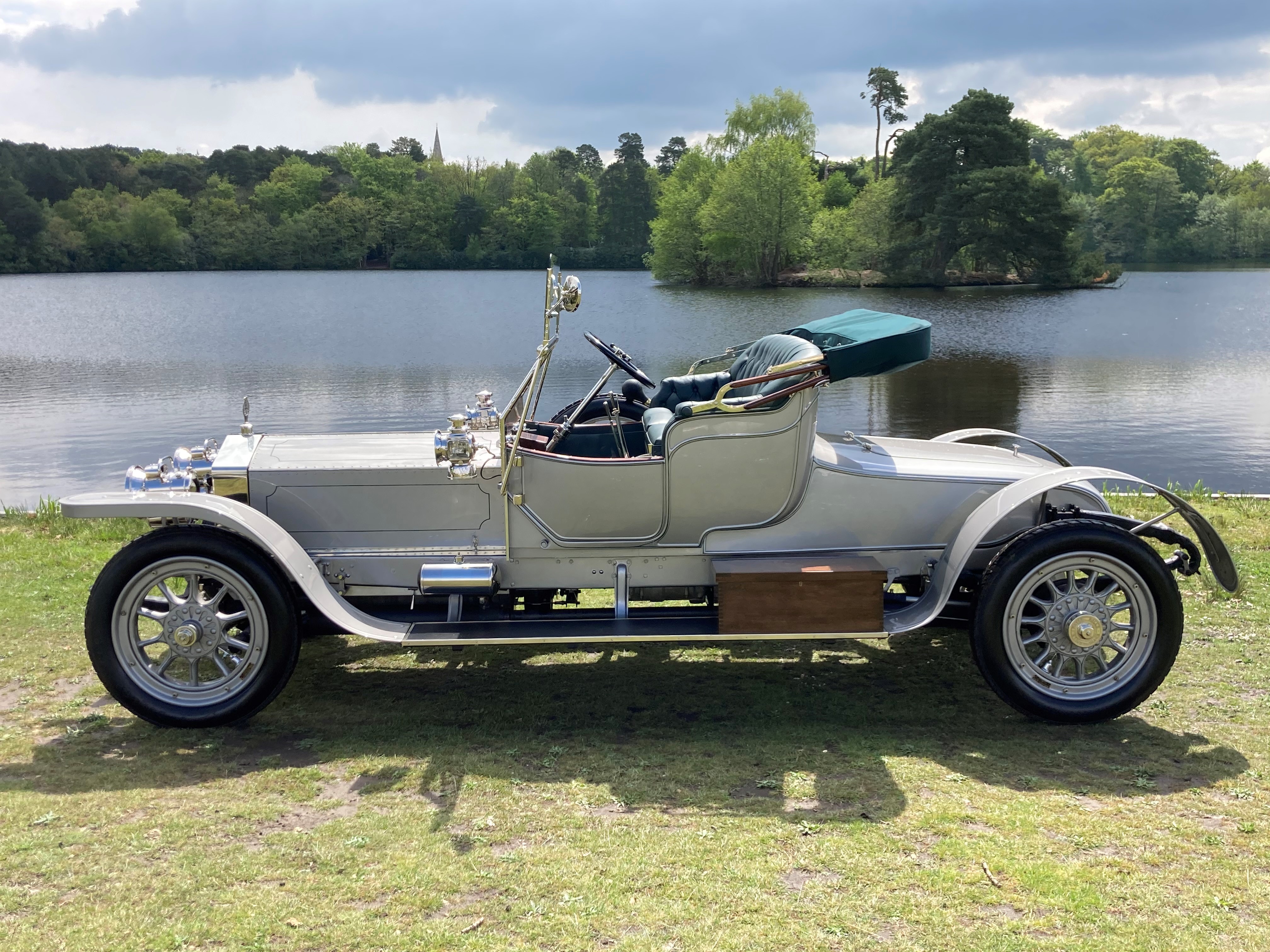 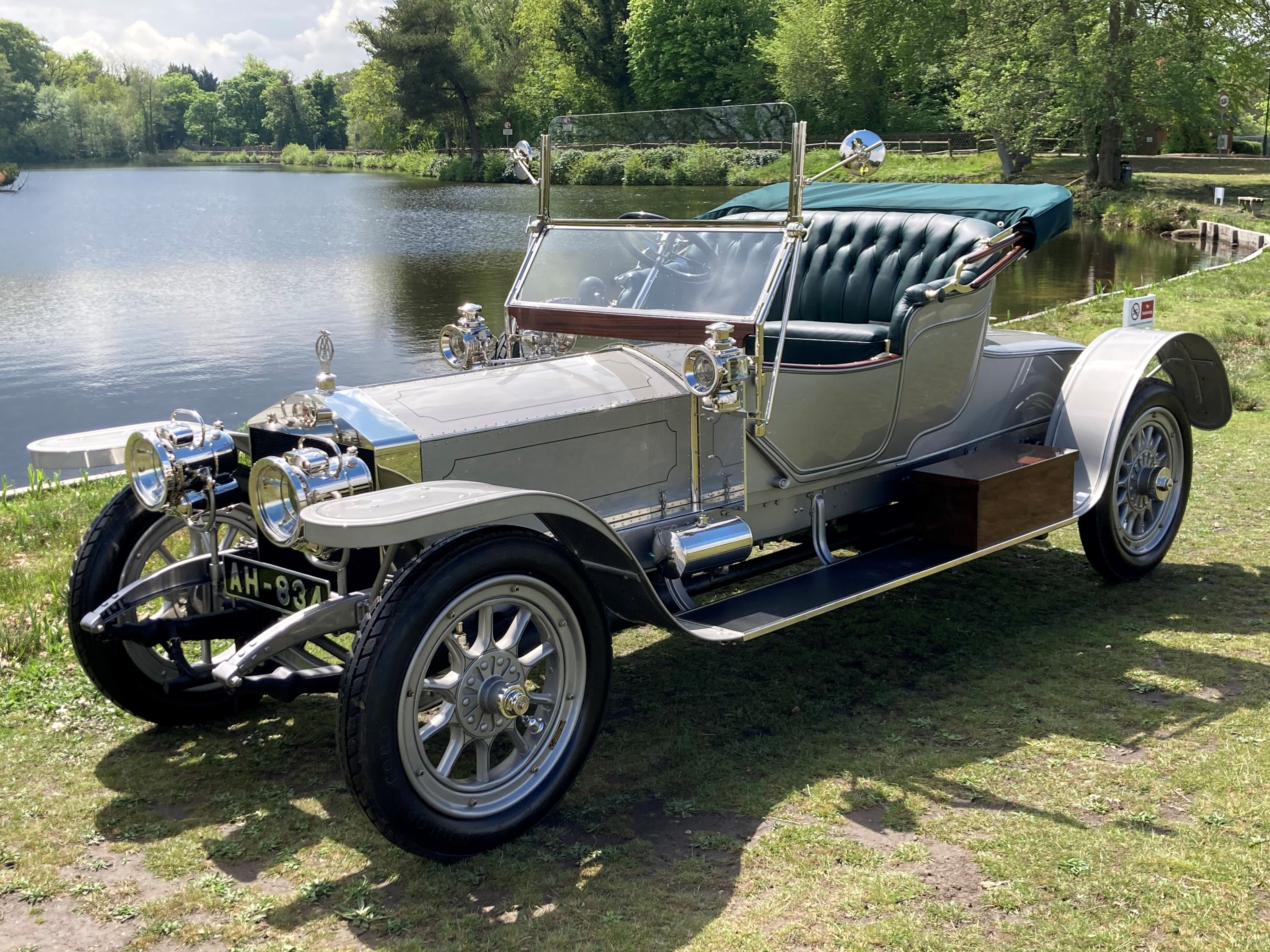 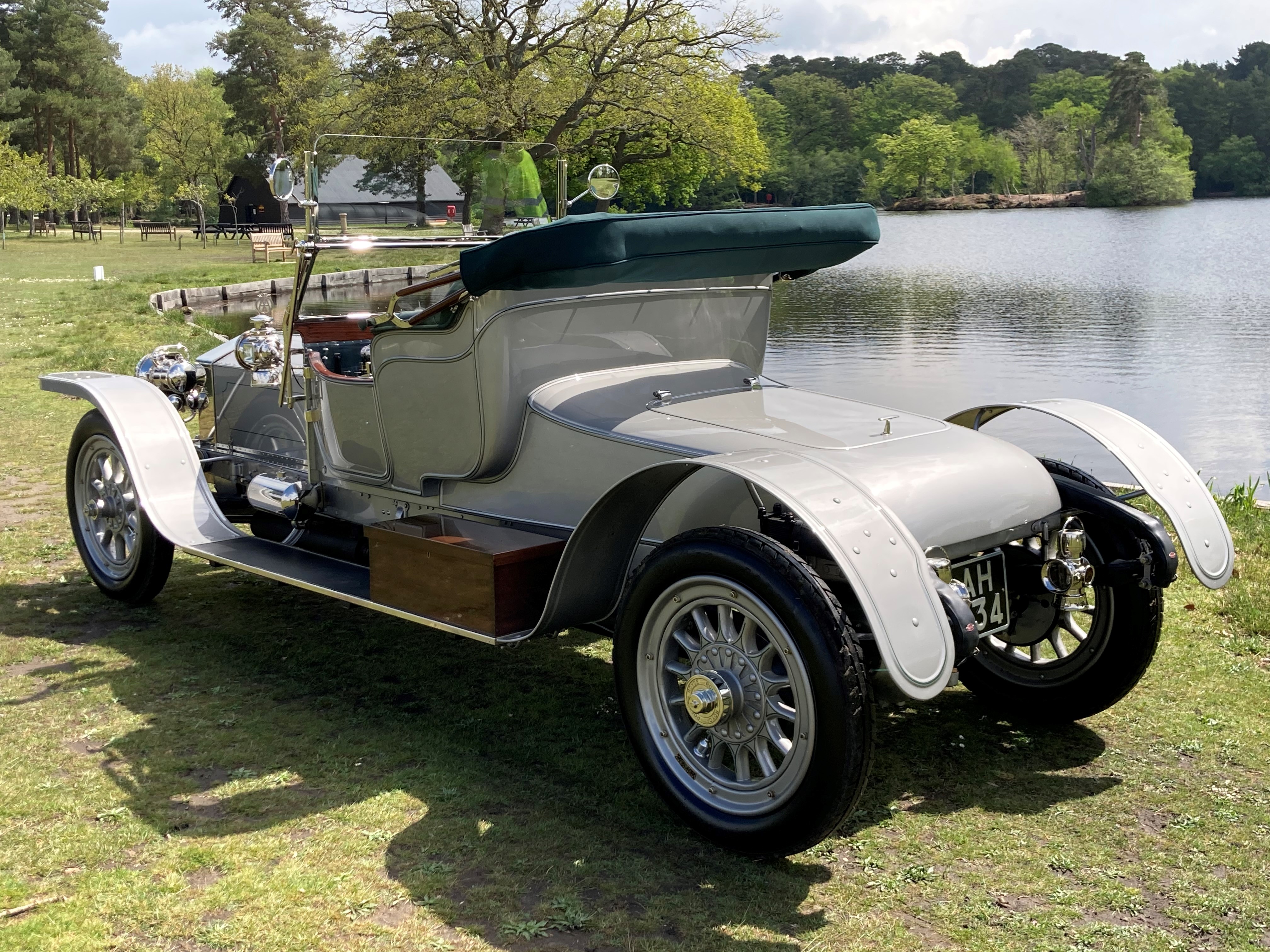 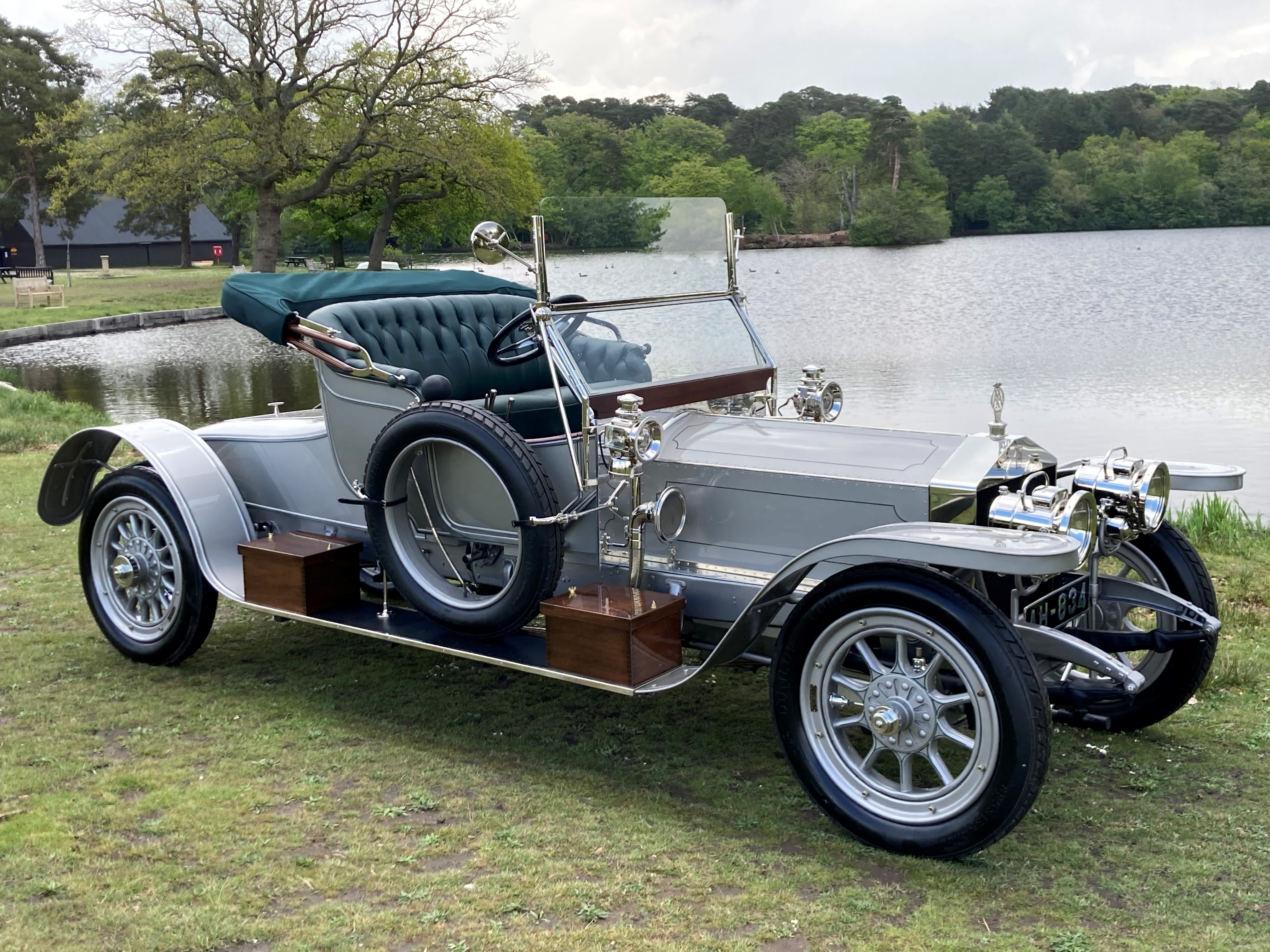 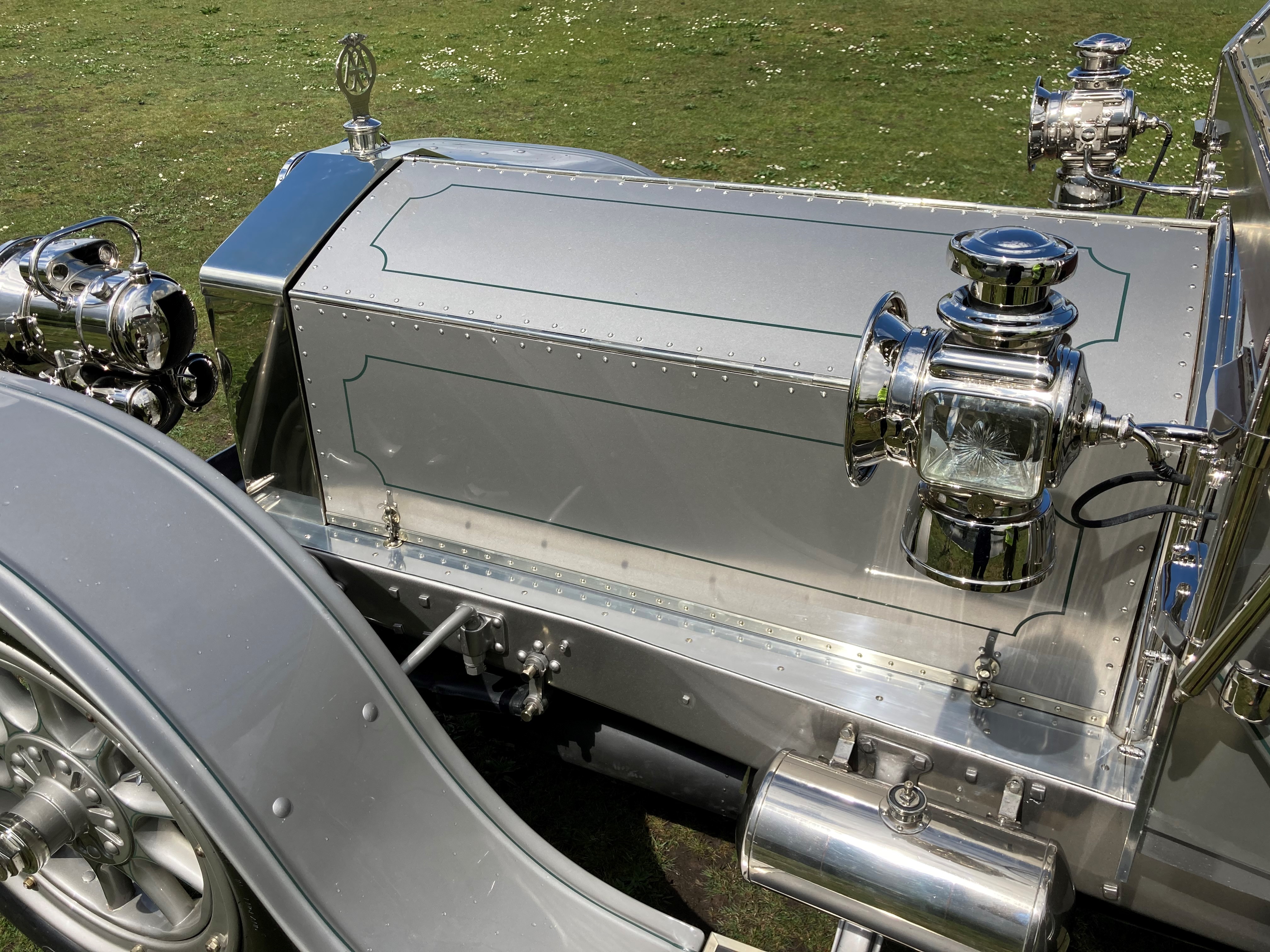 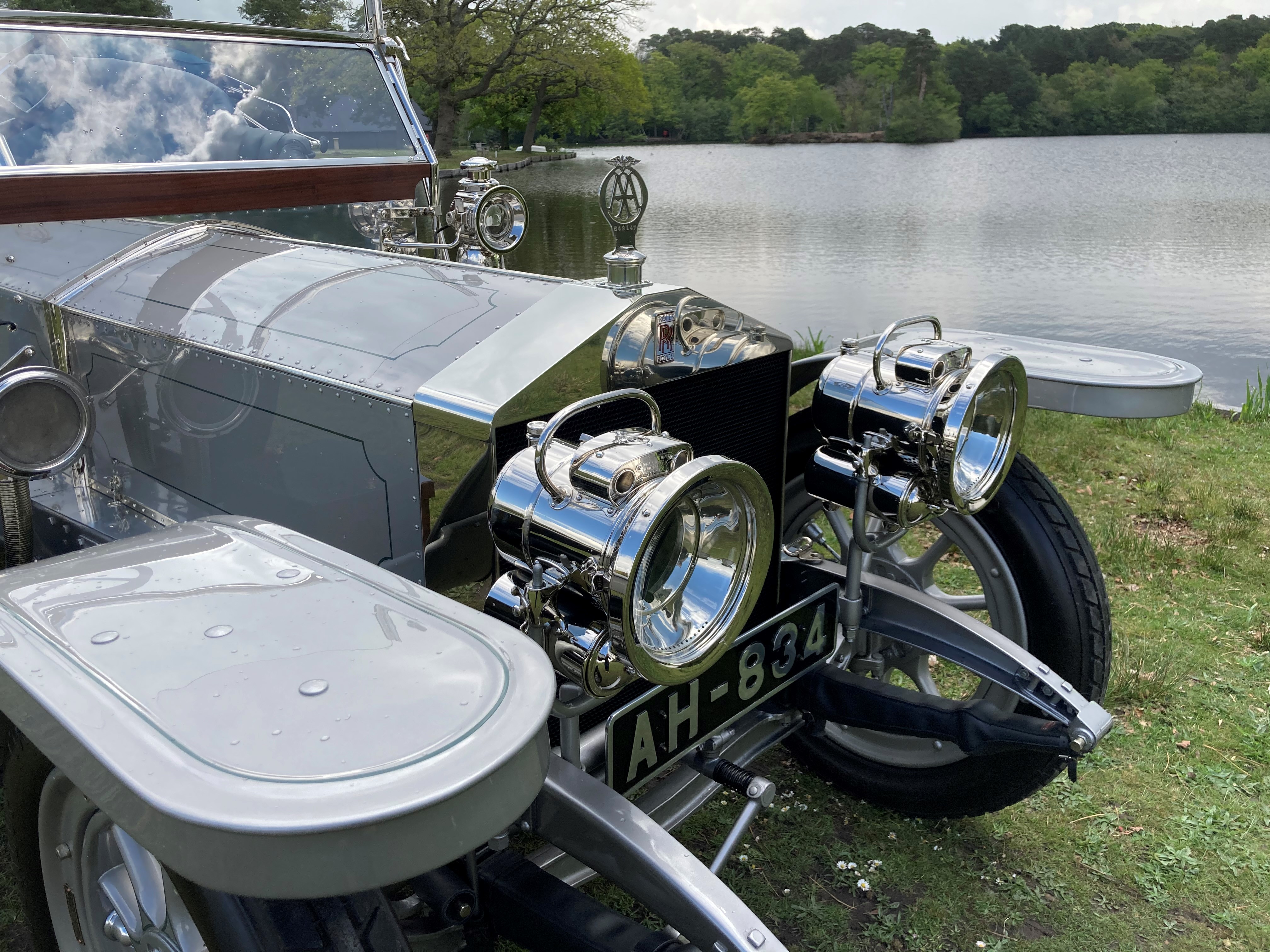 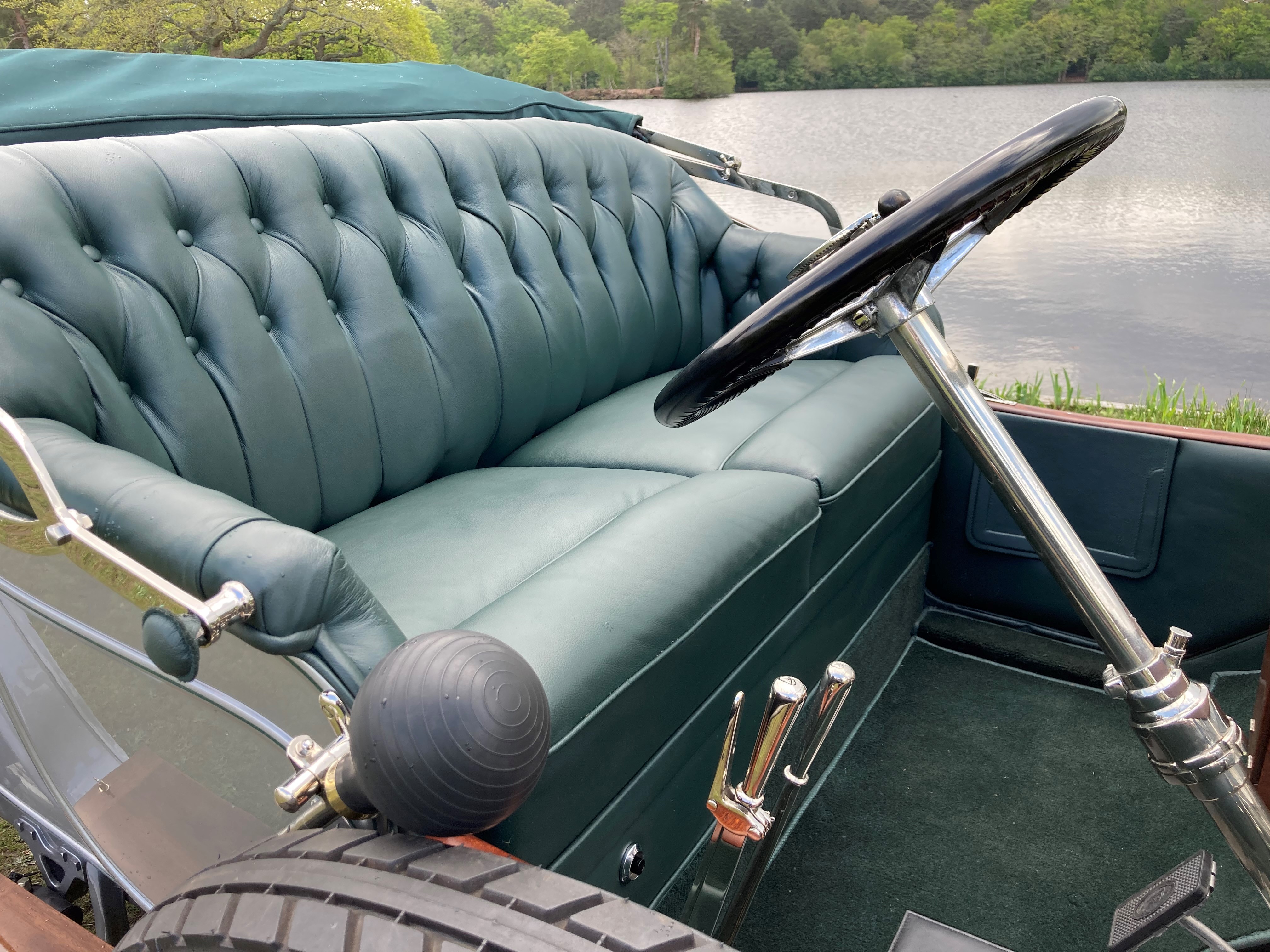 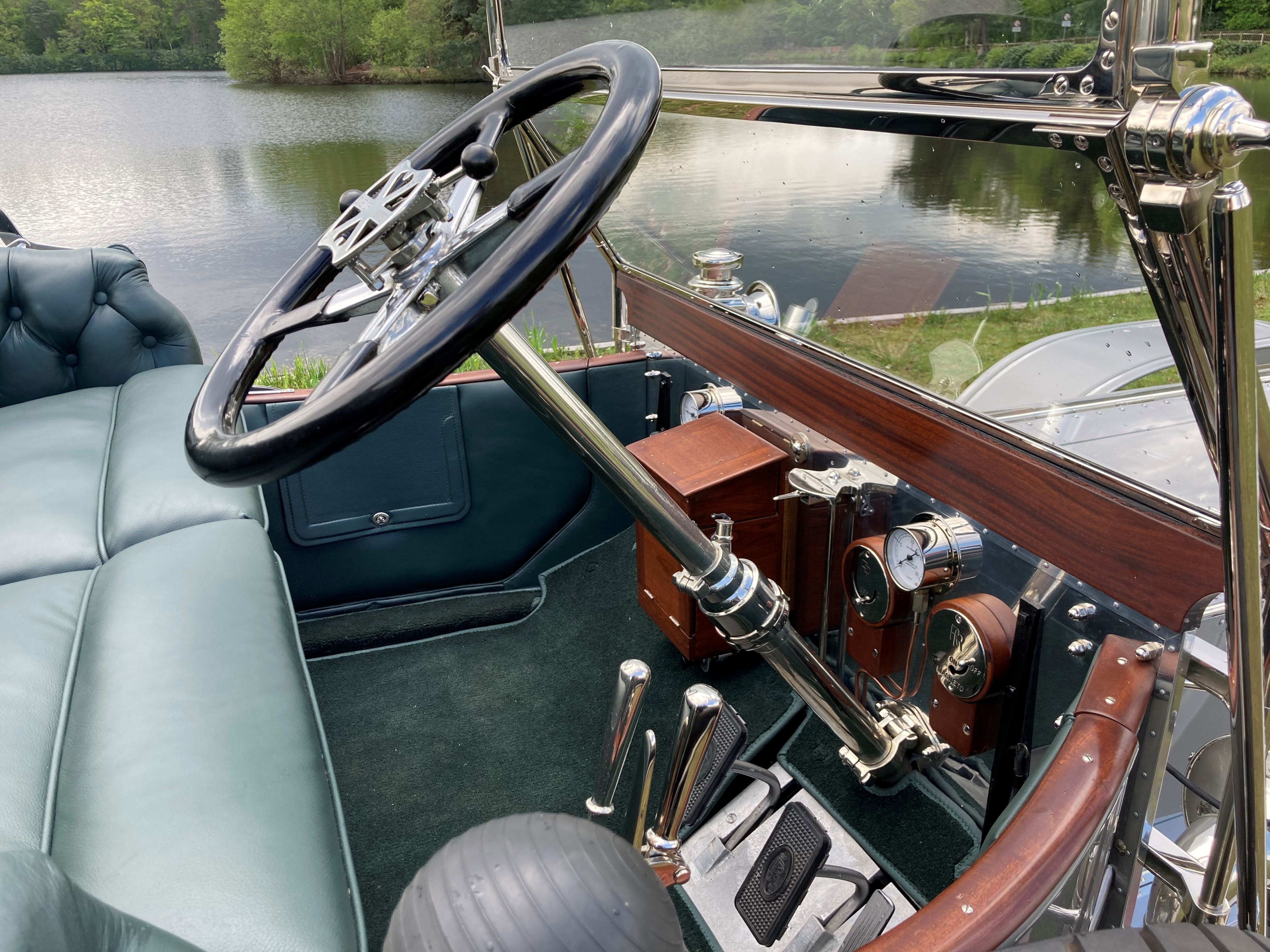 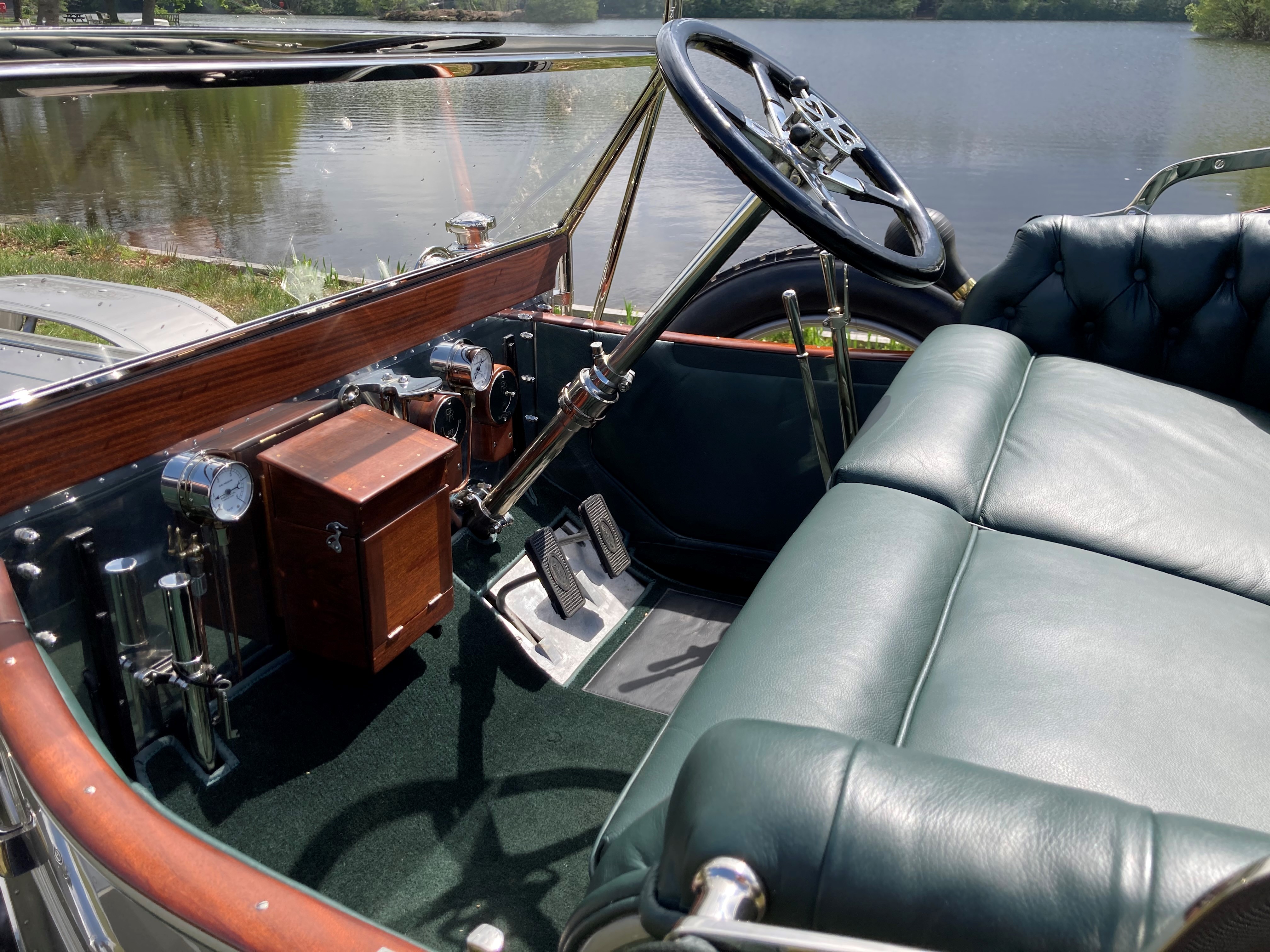 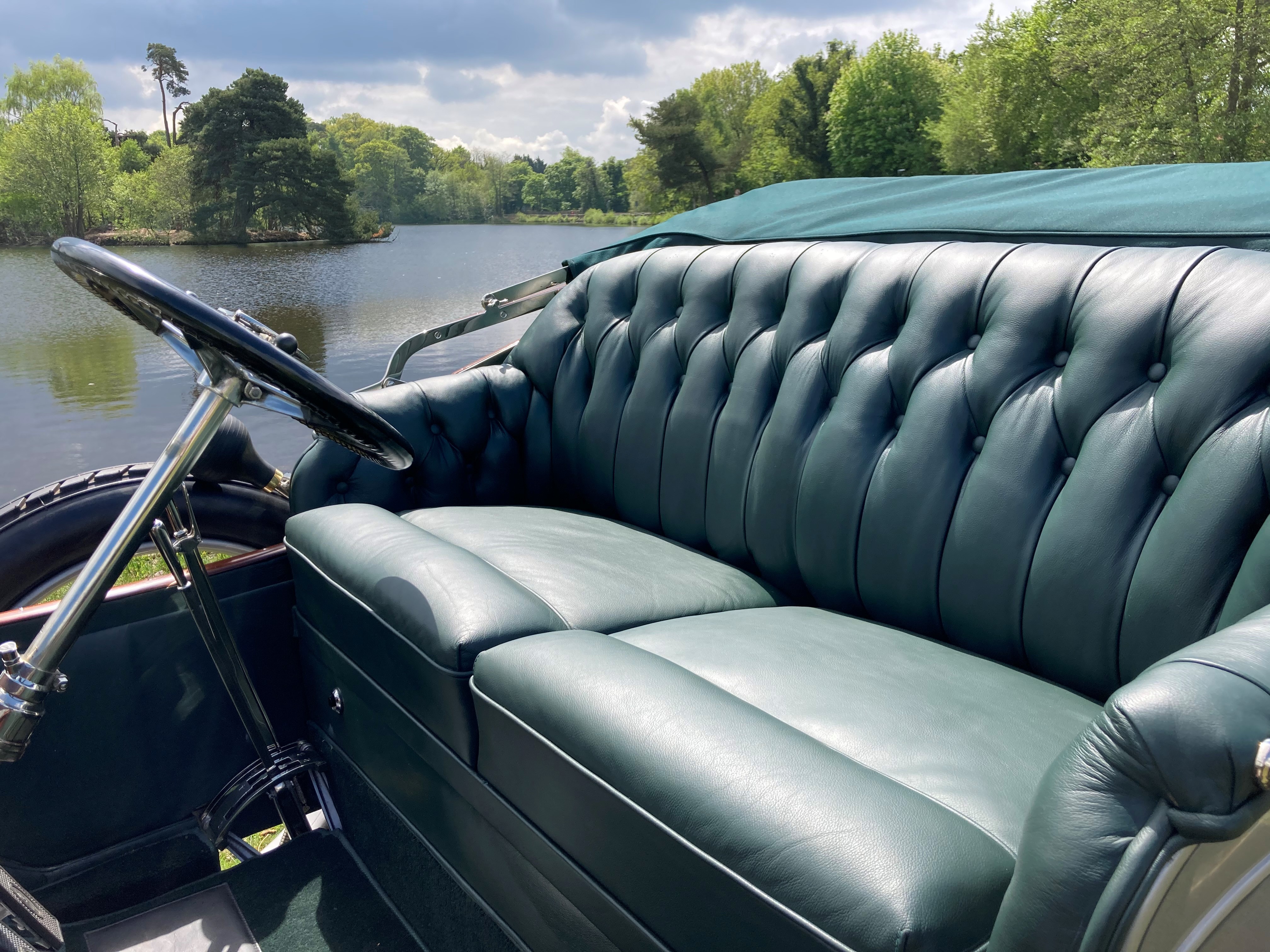 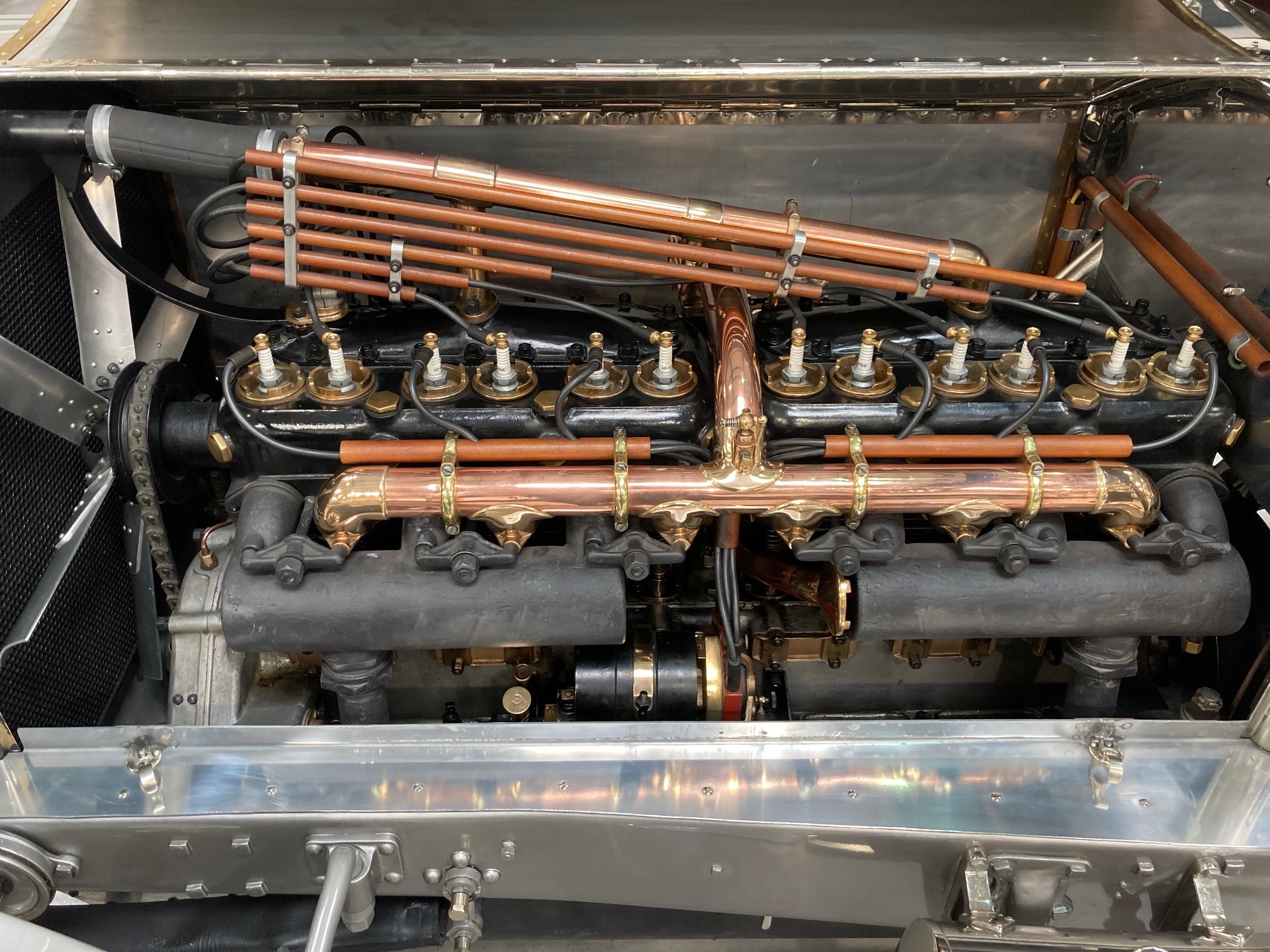 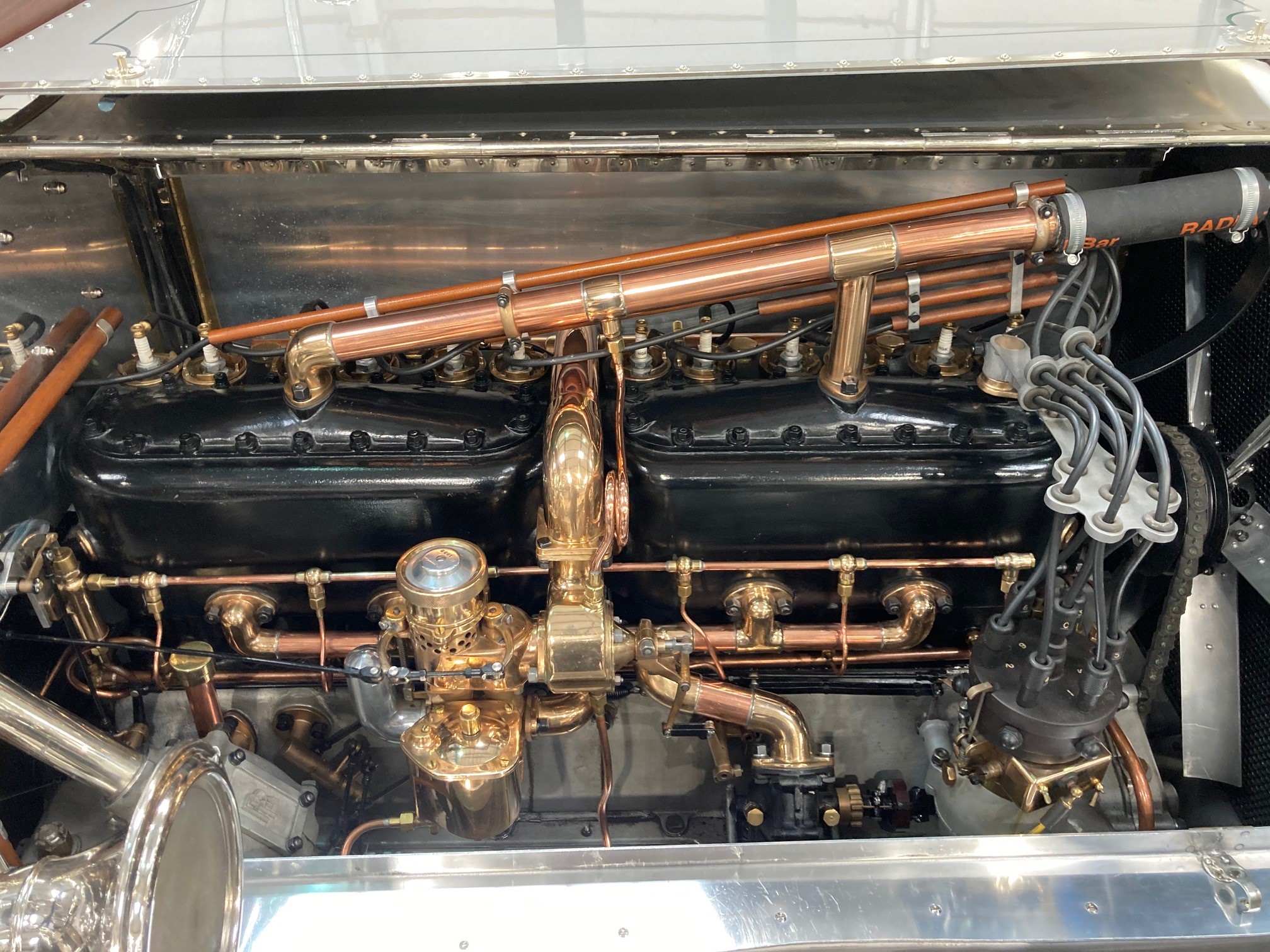 From late 1906 onwards Rolls-Royce Ltd began production of their 40/50hp which later became known as the Silver Ghost. The London Motor Show at Olympia in November of 1906 heralded its introduction to the motoring world and by the spring of 1907 the first batch of deliveries were met. The leading coachmakers of the time were familiar with being provided with the under carriage from the manufacturers and constructing a body to suit their customers’ requests. Rolls-Royce continued with this tried and tested method, providing chassis and engine to the coachbuilder of the customer’s choice who constructed the bodywork, painted, trimmed and furnished the car to order. Almost overnight long-established coach makers who had been in business for generations had to adapt their way of thinking away from horse drawn carriage to the new horseless vehicle. The Silver Ghost became an almost instant success thanks to the soundness of its design and the pain staking lengths the Rolls-Royce engineers and workmen went to during construction. Its reputation was enhanced further in 1911 following the trial cars successful London to Edinburgh round trip using only top gear, demonstrating the power and flexibility of the engine, whilst easing any lingering doubts of potential customers who were previously more at home with a set of reins than a steering wheel. Following the end of hostilities in 1918 there was a shift away from the previous Edwardian style of body construction. However, the tried and tested policy of supplying chassis only allowed Rolls-Royce customers almost unlimited choice and freedom when choosing the style of their new motor car. Fashions and tastes inevitably changed but Rolls-Royce customers moved with the times ensuring the continued success of this now legendary motor car. By 1925 the exceptionally successful eighteen-year production run of the Silver Ghost had firmly put Rolls-Royce at the forefront of motor car production. The term “The Best Car in the World” had been deservedly earnt. It is fair to say that the Ghost’s efficiency, reliability, and superb performance were unmatched at the time and its reputation laid the foundations for the continued success of the company.

Chassis No 1009 which we are currently offering for sale was originally on test at the Derby works on the 18th of June 1909 and dispatched to Laurie & Marner of Oxford Street in London to be sold to Mrs W.K.D’Arcy of Bylaugh Park, Dereham, Norfolk. She retained the car until 1924. The original sales card does not reveal the coachbuilder but with a formal upright “A” rake steering column specified, it would suggest a formal limousine or landaulette body was first fitted. The Derby construction card states “To carry seven passengers and light luggage, fit springs to carry maximum load-passengers very heavy people.”

The Norfolk County Council issued the car with the registration number AH 834, which is still carries today. The local coachbuilder to Mrs D’Arcy would have been Mann Egerton & Co of Norwich who were established in 1909, their first body for a Rolls-Royce was a landaulette. The early records from Mann Egerton do not reveal the registration number of this Rolls-Royce, but it may well have been the original coachwork for Chassis No 1009. There are also mentions in some text dedicated to the very early Silver Ghosts of a Mulliner limousine body being fitted to the car during the 1920’s, but we are unable to confirm this.

After the second world war, Chassis No 1009 became part of the well-known collection belonging to Mr Stanley Sears of Bolney in Sussex. Mr Sears was a founding member of the Rolls-Royce 20-Ghost Club. A photo in the cars history file taken in the 1940’s shows Chassis No 1009 as part of a line-up of eleven Rolls-Royces from Mr Sears collection. At this point the car is fitted with limousine coachwork.

In the 1950’s Mr Sears sold Chassis No 1009 to Mr E.L. Wood who in turn sold it to Mr A.G. Van Hove who lived in California, as recorded in the 1957 RROC Directory. By 1959 the car had been sold to Mr Carl Anderson of Bel Air, Los Angeles who retained the car until 1973. In 1959 Mr Anderson instructed the construction of a new body in the style of Charles Rolls original Balloon Car bodied by H.J.Mulliner. He entrusted this work to Maurice Schwartz of Bohmann & Schwartz of Pasadena. It carried a wooden bulkhead in common with the very early production Silver Ghosts. The car was campaigned at various Californian concours events during Mr Andersons ownership, including at Pebble Beach, where it won second in class.

The RROC Directory shows the ownership changed in 1980 when the car was sold to Mr Lee S.de Laittre of Los Angeles. The car appeared in the Los Angeles Times on the 27th of July 1982. It changed hands in 1999 and headed east, where it became part of the collection belonging to Mr Millard Newman of Florida.

Chassis No 1009 returned to the UK in 2006 and was supplied by Frank Dale & Stepsons in 2007 to the present owner. Between 2017 and 2021 the car was entrusted to Silver Ghost specialists A.J.Glew who undertook restoration works to the car which included but were not limited to, a complete mechanical overhaul, detailed restoration of the coachwork and are-paint, a new interior and hood, a re-wire and refurbishment of all the cars brightwork. The result is a magnificent car cosmetically speaking that drives beautifully.