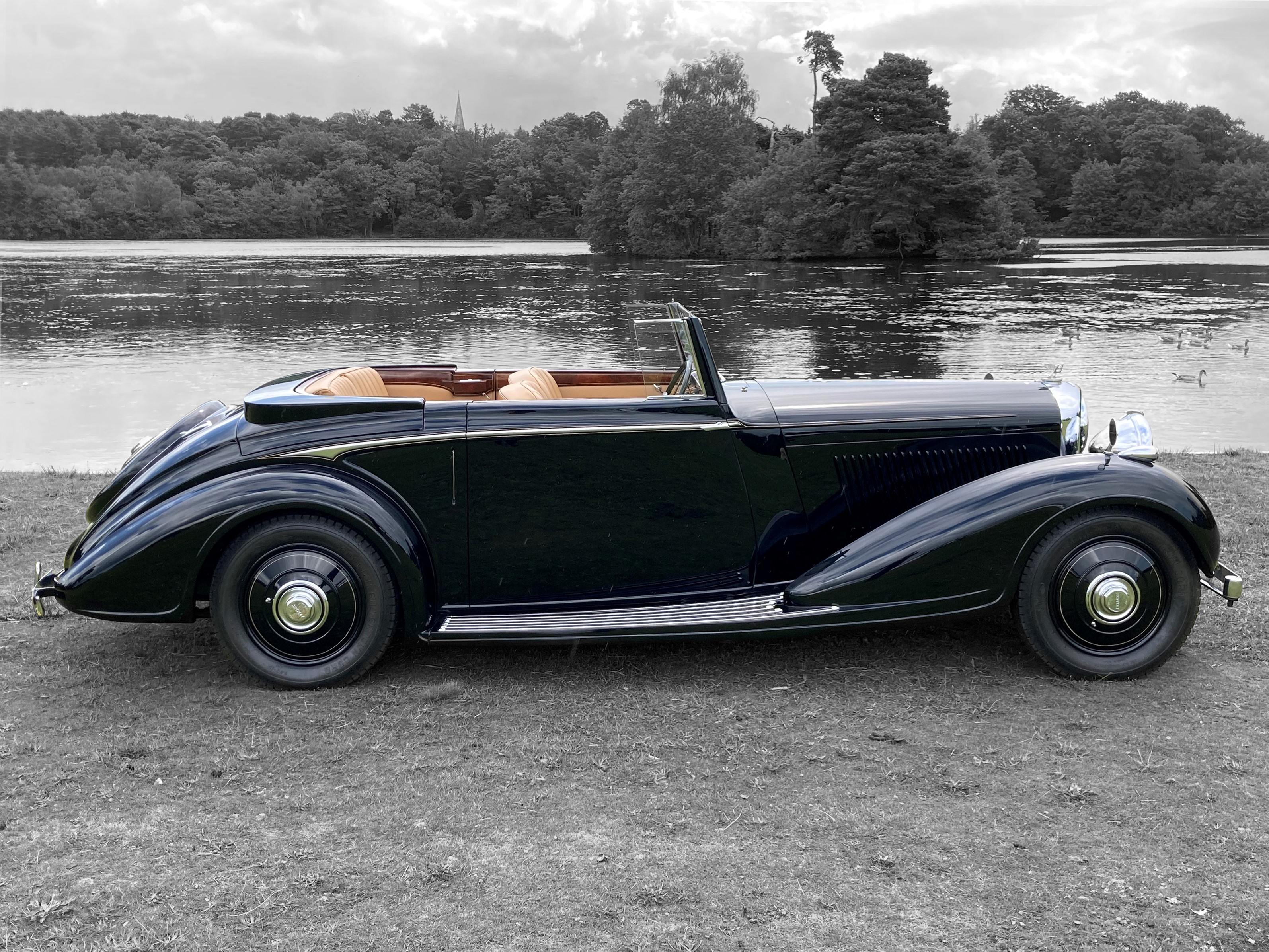 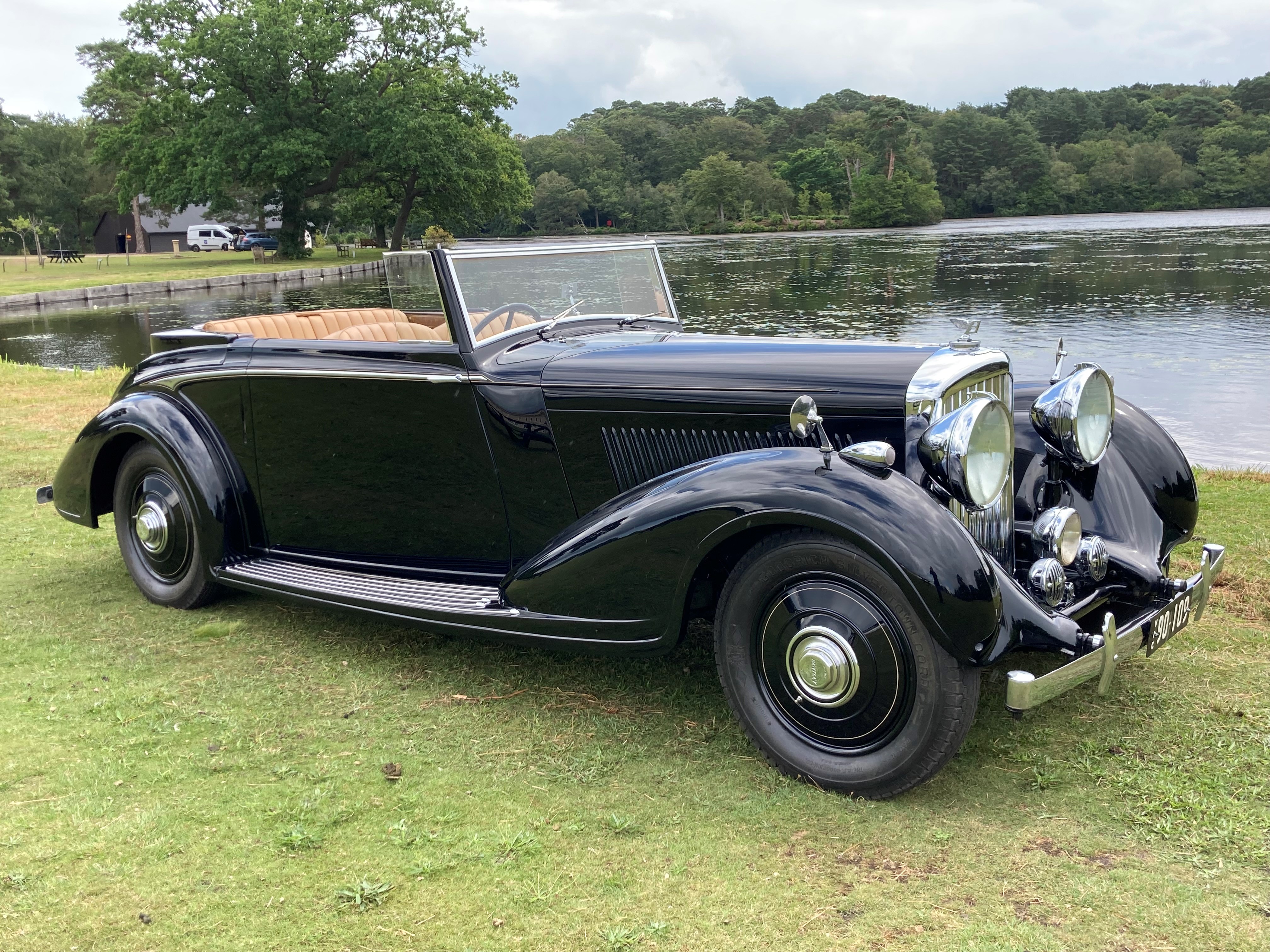 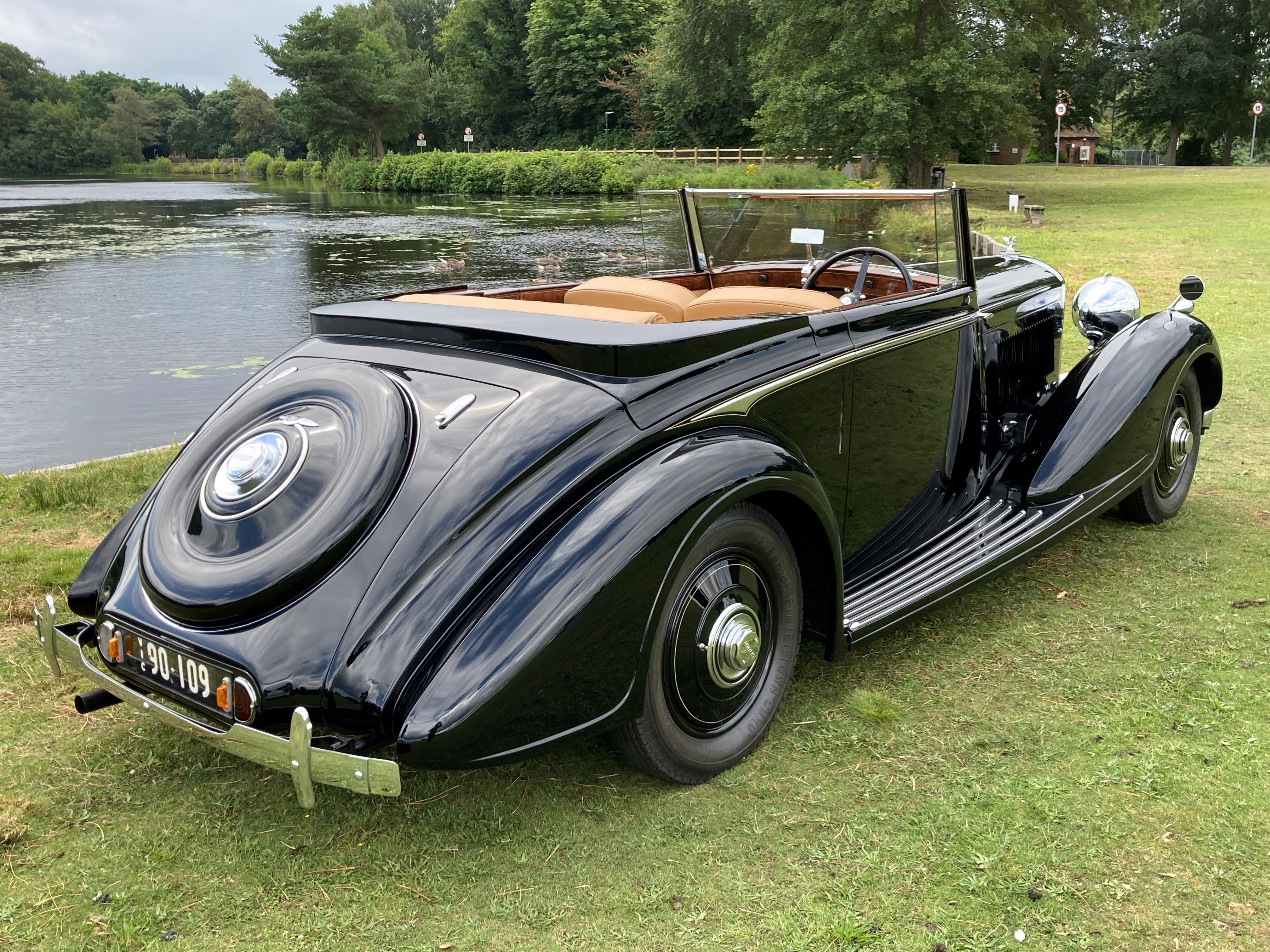 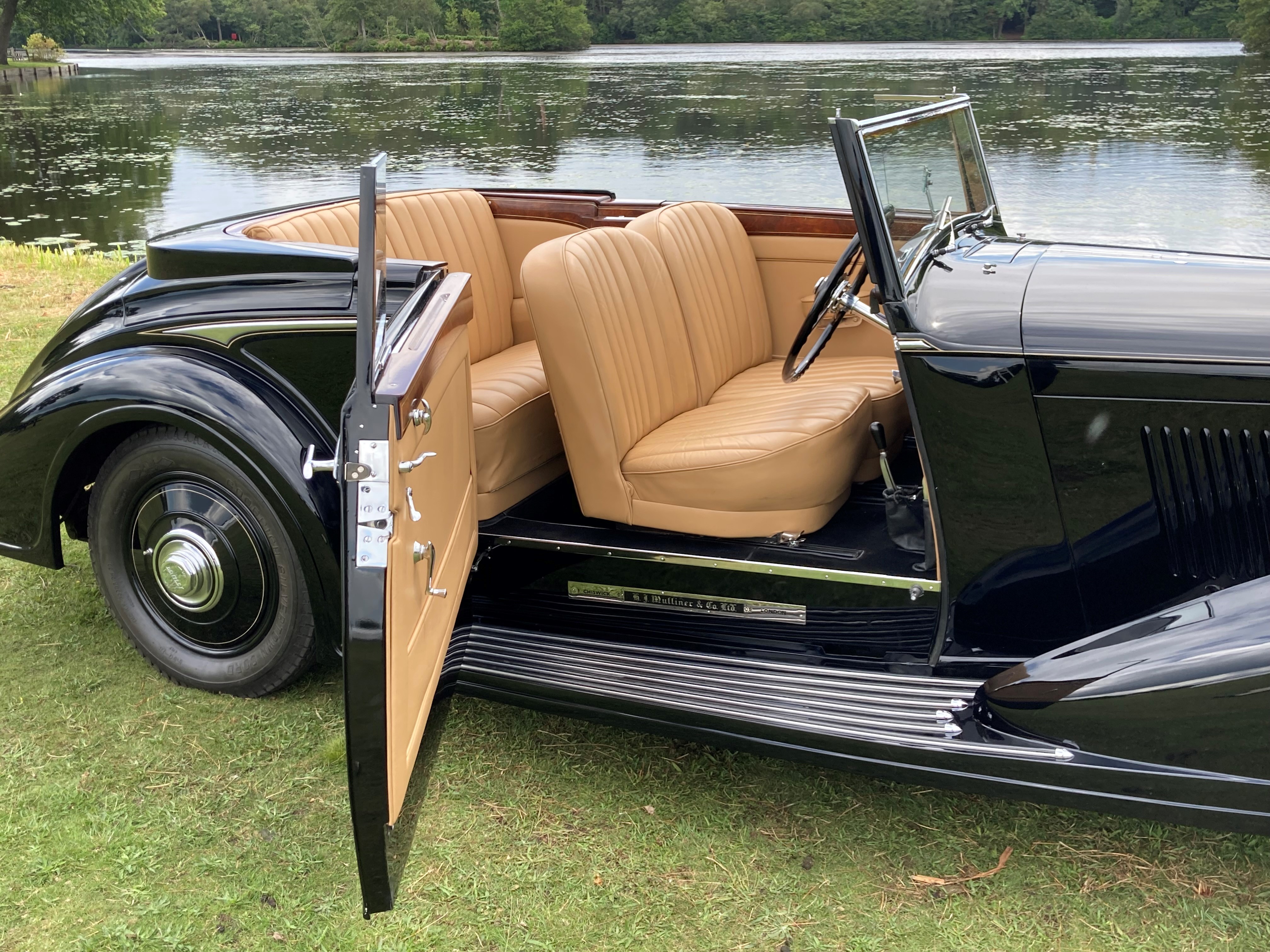 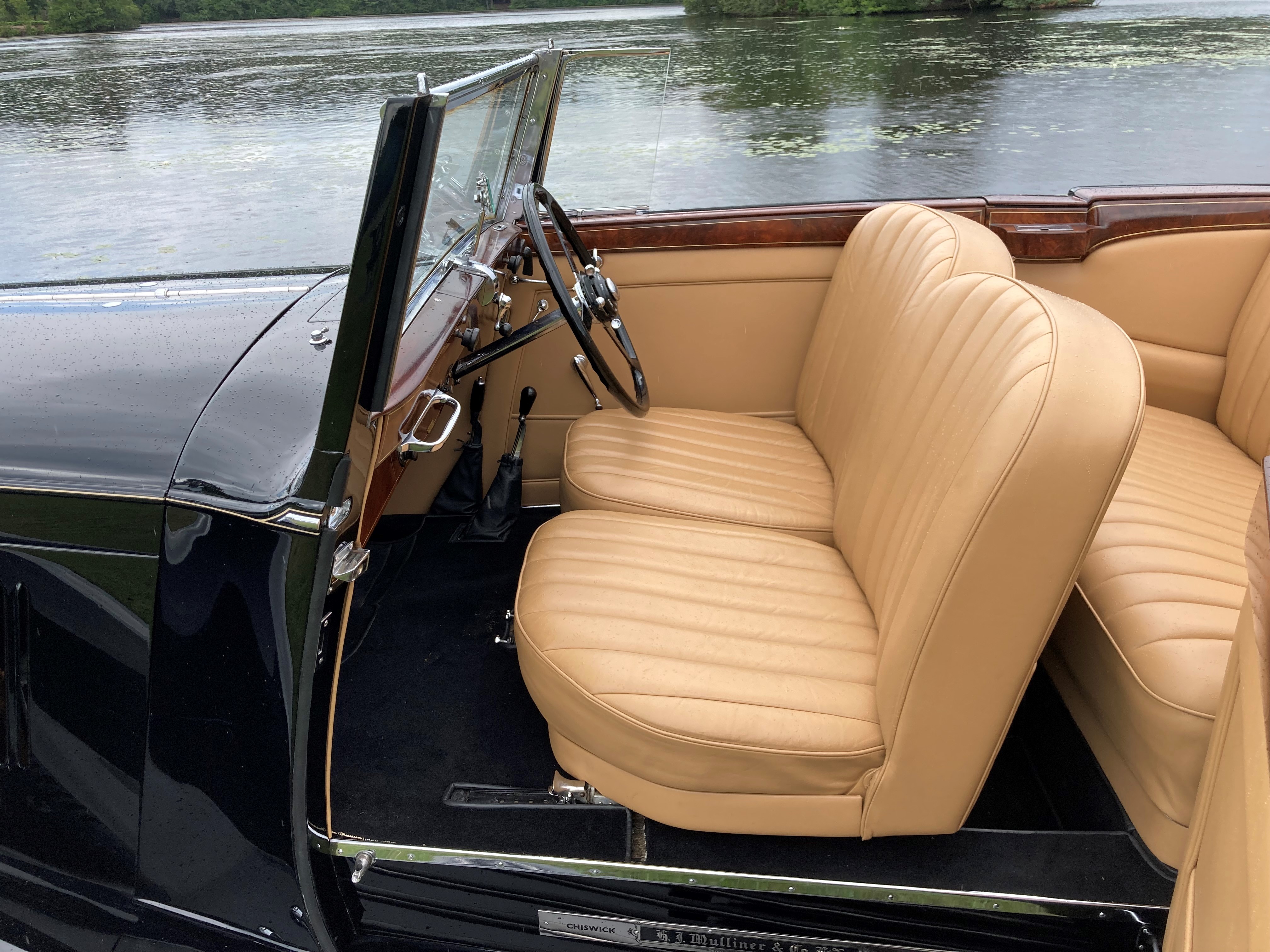 During the late 1920s and early 1930s Bentley ran into grave financial trouble and by 1931 Rolls-Royce had stepped in and bought the assets and goodwill of the defunct company and formed a new one, Bentley Motors (1931) Ltd. Rolls-Royce had considered the Bentley marque to be a growing threat to their future success, but following their purchase decided to continue the Bentley name, albeit under their own stewardship, taking the company in an entirely new direction with the creation of the Silent Sports Car or Derby Bentley. In 1933 the new Bentley 3.5 Litre model was released and was an instant success. The combination of effortless power and style met with almost universal praise. It was powered by a developed twin carburettor version of Rolls-Royces own 20/25 model and was installed in a low 126 inch wheel base chassis that basically remained unaltered until the cessation of production in 1939 due to the outbreak of hostilities. Synchromesh was present on third and fourth gears and the Derby’s were fitted with a crossflow cylinder head and superb servo assisted brakes, encapsulating all of the perfection of Rolls-Royce engineering in this small sporting Bentley. Fitting of individual coachwork by approved body builders continued in true Rolls-Royce fashion giving potential buyers a great deal of choice in the look of their new motor car. 1936 saw further improvements with the introduction of the 4.25 Litre model when production of the 3.5 Litre unit ceased. The coachwork options available to buyers of Derby Bentleys was wide, with numerous body builders in the UK and further afield.

One of London’s best known coachbuilders were H.J.Mulliner of Chiswick, who produced a number of different coachwork options for Derby Bentley chassis. One of their finest was Design No 5969, a concealed drophead coupe with pontoon style front wings. Just eight cars were produced to this design, with Chassis No B157LE being the last example built to this design number. It was supplied new in October of 1938, finished in black with fawn leather, to Mr Donald Cook of Surrey who kept the car until 1955 when he traded it back to Jack Barclay Limited, for a Bentley Mk VI. It was sold later in 1955 to Mr G Belbin of London and then again in 1958 to Mr Booth of Henley on Thames. It was first encountered by Frank Dale & Stepsons in July 1969, when sold to Mr Eric Rainsford who then exported the car to Australia where it remained until late 2020. Mr Rainsford kept B157LE in his personal collection for several decades before selling it to a friend some years ago. During Mr Rainsford’s ownership, the car benefited from a body off restoration in the mid 1980’s and more recently it has benefitted from further works, including but not limited to an engine overhaul, the overhaul and fitting of a high ratio back axle, a full re-trim, anew hood, new tyres, new exhaust system and woodwork restoration. The car has also been reviewed and prepared in our workshops prior to being offered for sale. It comes complete with a full small tool kit concealed in the boot, handbook, copy build sheets, copy chassis cards and a history file. The hood mechanism on this beautiful car is simple to operate and superbly designed.